A New York Times/Siena College poll came out on July 12th with some more bad news for President Joe Biden. According to the poll, President Biden's job approval rating was a paltry 33%. Worse is that 64% of Democrats want someone other than Biden leading their party and to be their presidential nominee in 2024. Only 23% want to see Biden nominated.

Digging further, 1/3 of those surveyed said age was key factor in Biden being replaced on the ticket. At 79 years, he is already the oldest person to hold the office of President. Many also cite Biden's apparent lack of mental acuity as well. Some of those polled said that watching Biden on TV reminded them of watching of a "zombie".

Biden is known to routinely suffer from serious memory issues, verbal slips, odd behavior and other SNAFUs, leaving his aides and staffers scurrying to "clarify" what he was saying, intending to do, or explaining away his "jokes".  Others point out that he uses a cheat sheet to get through speeches (which has occasionally been flashed to the cameras) as well as use an earpiece with someone nearby feeding him the answers, not to mention routine use of teleprompters.

Again, hinting as his age being a serious problem, 12% of the Democrats surveyed thought it was time to have "someone new" as president.  Meanwhile,10% of those polled said that Biden wasn't "progressive enough", while a mere 1% disagreed with on domestic issues.

According to the poll, about 75% of the population think the country is headed in the wrong direction, while just 13% are satisfied with things as they are. That's the worse result since about 2007 when almost 85% disapproved on the country's direction. 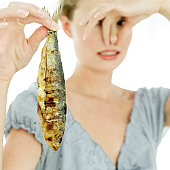 To make matters even  bleaker, the nation's largest political bloc, Independents, are equally dissatisfied with America's political and economic direction. The poll indicates that 3/4 of Independents disapprove of President Biden's handling of the country. Not unexpectedly, the majority of Republicans think Biden is doing a terrible job as president. His disapproval rating among Republicans is 87%!

If there was any good news to come out this poll, it's that 92% of Democrats said they would vote for President Biden if he was running against former President Donald Trump (the same poll also projected that in race between Biden and Trump, Biden would squeak by with a 44% to 41% margin of victory),  and that brings us to how Republicans currently feel about "The Donald".

According to the same poll, approximately 51% of Republicans surveys said that wouldn't vote for the former president if the GOP primary was held today. The polls indicated that about 25% would back Florida Governor, Ron DeSantis, while 7% would back Texas Senator Ted Cruz and 6% favored Trump's former Vice President, Mike Pence.

Nikki Haley tied with Pence, also with 6%. Haley is the current ambassador to the United Nations. Her claim to fame was during her tenure as governor of South Carolina and ordering the Confederate battle flag to be removed from the State Capitol. Bringing up the rear in straw primary was Mike Pompeo with a polite 2%. Pompeo was Trump's former Secretary of State and director of the CIA.

Interestingly, the January 6th protest failed to register as a serious issue among Republicans polled. 75% said that then President Trump was simply exercising his legal right to contest the outcome of the vote and wasn't responsible for the actions of the protestors.  This may be one of the main reasons the Democrats and corporate owned media has remained focused on destroying Trump's character and bleed him dry financially so well ahead of the 2024 election cycle.

Nevertheless, despite the relatively favorable numbers among potential Republican primary voters, it's worth noting that among voters under 34 years of age, a strong majority---64%----said they wouldn't back Trump. Among those with at least a bachelor's degree, 65% said that Trump wouldn't be giving their support either (32% said they'd back Governor DeSantis, while 12% had Nikki Haley's back with 10% hanging on to Pence).  Notably, 58% of those without a college degree said they would stick with "The Donald".

So, if Biden backs out of running in 2024, who are the most likely Democrats to run for the top job? Well, obviously, the most likely prospect would be Biden's Vice President, Kamala Harris. However, Ms. Harris' job performance has been as dismal as her boss's. With having the distinction of having the worst job rating of any Vice President (her current disapproval rating is 64%),it's unlikely she'll get any serious support in a bid for President.

Next is the perennial candidate for president, Bernie Sanders. If Bernie runs again, he should at least received some sort of award for perseverance. This would be the third time the self-proclaimed "democratic socialist" will try to take a bite at the golden apple. It would also say something about his character.

In the 2016 Democratic primary against Hillary Clinton, Bernie and his campaign were (for lack of a better word) royally screwed over by the Hillary campaign, the Democratic Party, the Democratic powerbrokers, and all with the help of the mainstream media. The results were a total and utter farce.

The result of the blatantly rigged election resulted in the ultimate removal of not one, but two chairwomen of the Democratic Party (Rep. Debbie Wasserman-Schultz and Donna Brazile), and yet, aside from their removal, were rewarded for their efforts by the power elite (if nothing else it displayed the brazen clout of the ruling Oligarchy). 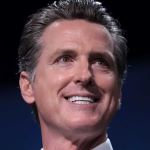 Further behind is Pete Buttigieg and Gavin Newsom. Buttigieg is Biden's Secretary of Transportation. He is relatively young; in his early 40's. He's been a member of the Truman National Security project since 2005, which is a progressive institute focused in national security and foreign affairs issues. He is the former mayor of South Bend Indiana, and if elected, he would be America's first openly gay president.

Gavin Newsom is the current governor of California and former mayor of San Francisco, the hometown of Speaker of the House, Nancy Pelosi who is also his aunt by marriage (which may be reason enough to look elsewhere). Newsom, who has a net worth of some $20 million dollars, comes from one of four of the most powerful political families in San Francisco, has been the subject of several recall efforts during his tenure as governor, including most recently in 2021 over his support of sanctuary for illegal immigrants. The effort failed. He is currently running for reelection which will be held on November 8, 2022.

Next in line is Senator Elizabeth Warren of Massachusetts. A progressive, she finished third in the 2020 Democratic Primary. Senator Warren is known as strong supporter and friend of former President Barack Obama and his Secretary of State, Hillary Clinton.  Although she has frequently publicly criticized corporate money in politics,  Warren began accepting corporate money from "Super Pacs" in February 2020 , which has included Microsoft, Apple Inc, Alphabet Inc, IBM, and AT&T among many others. She currently has just over $142 million in her war chest.

Other possible contestants in a Biden-less 2024 Democrat Primary could be New Jersey Senator Cory Booker, Minnesota Senator Amy Klobuchar, and North Carolina Governor Roy Cooper. Of course, we can't rule out the possibility that Hillary Clinton might make a third run for the Oval Office. If she does, she'll be around 76 years old, still younger than Joe Biden, who'd be 82 if he runs.

But Hillary carries some seriously personal and political heavy baggage. She has also lost much of her former luster (her most recent approval rating, from 2019, was just 36%). Still, she has the credentials (and dirt) plus access to more than enough money to buy the presidency. If only she could get her personality and past history out of the way!

So, what about the Republicans? Assuming "The Trumpster" bows out, who else besides DeSantis, Cruz, Haley, or Pence might considering wading into the deep end of the swamp? Well, unfortunately, the bench on the Republican side isn't every deep. 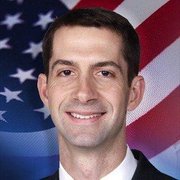 Aside from the names mentioned earlier, South Dakota's Kristi Noem is mentioned as a possible prospect. However, with roughly a year to go before early campaigning begins, Kristi lacks name recognition and the big dollars needed to buy a presidency. The same goes for fellow Republican Tom Cotton.

Cotton is a U.S. Senator from Bill Clinton's home state of Arkansas. Although he's still relatively young at age 47, he's graduated from Harvard University, served as a Captain in the Army where he was a member of the 101st Airborne and qualified as a Army Ranger.

He served in Iraq and Afghanistan, earning a Bronze Star, Army Commendation Medal with Oak Leaf, a Combat Infantry Badge among others. He also served  a term in the U.S. House of Representatives. He has maintained a "A" rating with the NRA and is a strong opponent to amnesty for illegal immigrants. He opposes Roe v. Wade and the Affordable Healthcare Act ("Obamacare").  His view on foreign affairs is considered to be "hawkish".

Lastly, Cotton is known as one of Biden's most vocal critics. It should also be noted that he isn't much of a Trump supporter and has stated that the "insurrectionists" of January 6th should be "brought to justice". However, Cotton's twin Achilles heels are that he still suffers from a lack of name recognition outside of his state and lacks that all important access to the Corporate PAC teller. Cotton may not run in 2024, but I'd keep an eye on him. If you like conservatives, he's a player to watch.

So there you have it. Should Joe Biden run again? If not, who do you think should? What do think about a second term Trump or has his time past? One name not mention as a possible presidential candidate is former Congresswoman from Hawaii, Tulsi Gabbard. I think she would make a good choice, but she's not shown any signs of getting back in politics as a candidate.

America is in serious trouble. I don't know if we can survive another term by either Biden or "The Donald", but our other choices at the moment don't look especially promising. What do you think?

Half of G.O.P. Voters Ready To Leave Trump Behind, PollFinds

55% of Americans disapprove of the president

Favorability rating of Vice President Kamala Harris in theUnited States, as of July 2022

Who will run for President in 2024? Rumored Republican andDemocratic Candidates

DMC betrayed Bernie Sanders and the rest of America

The 10 Republicans most likely to run for President

Following my recent article on Senator Mitch McConnell's and Speaker Nancy Pelosi's approval ratings, I thought it would interesting... 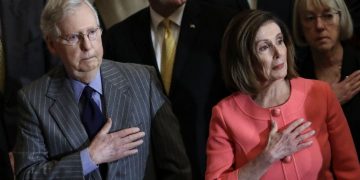