The Tax Man Cometh: How Much Longer Can We Sustain the Increasing National Debt?

With April 15th just around the corner, I thought now would be a good time to look at the state of our national finances. America is currently in debt to the tune of approximately $24 trillion dollars. That means each taxpayer owes about $161,000...plus interest. Our debt-to-GDP (Gross Domestic Product) ratio is 106%. So, for every $100 dollars we take, we pay out $106. That's a recipe for disaster.

At present, 51% of our nation's taxes come from personal income tax---$1.65 billion dollars. Another 25% or $1.15 billion comes from Social Security taxes. Meanwhile corporations pay just $320 billion or about 6% of the federal revenue. Estate or inheritance tax, typically paid by the wealthy, makes up just $23 billion, while the balance, $260 billion, is paid through other forms of taxes and fees.

That represents our nation's revenue. Now, how about what we spend the money on? 26% goes to Medicare, Medicaid, ACA, CHIP, and marketplace subsidies; of this, Medicare gets three-fifths of the money. 24% or $940 billion goes to Social Security, while the military gets 15% or $611 billion dollars. Safety net programs such as unemployment , school meals, low income housing assistance get 9% or around $357 billion. 7% pays interest on the national debt. The balance goes to federal and veteran retirees (8%), transportation and infrastructure (2%), science and medical R&D (2%) with non-international security getting 1%. The remainder goes to miscellaneous programs including education related programs.

Think that's all there is to it? Consider that this doesn't include $125 trillion dollars is allocated for unfunded liabilities. It also doesn't cover the military's or various intelligence agencies' unreported "black budget" programs which are estimated to be over $80 billion. According to the nonpartisan Congressional Budget Office, about 65% of the national debt is held by the public. By 2028 it will 100%. That means all of our taxes will go just to service the national debt. 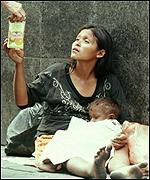 Another interesting factoid is that only nine countries have worse debt-to-GDP ratios than we do. Unfortunately many are on the news and are tittering on economic collapse such as Greece, Italy, Bhutan, Mozambique, and Portugal. Worse still is that the United States ranks just above Djibouti in East Africa, Jamaica, Cyprus, Belgium (which has been overrun by the so-called "migrants"), and the Congo. It would take the combined economies of China, India, and Japan to pay off our national debt.

It might be worth noting that foreign governments currently own just under 30% of our national debt (the two largest are Japan and China which own 1.15 trillion and $1.11 trillion respectively or about 15% combined). Next is the U.K with about $334 billion in U.S. debt and Brazil which owns just under $300 billion. Ireland and Switzerland round out the top five with $285.6 and $263.3 billion.

You don't have to be a CPA, a political scientist or economist (which I was educated as) to understand that this is insane. There will be a breaking point. There's only so much road that the proverbial "can" can be kicked down, and we've about reached it. Most economists put the "end of the road" at around 2025 or 2030. As the "game" is now being played, the only solution is dramatically increase taxes, be it by increasing existing taxes or finding new and more "obscure" revenue streams.

The problem is that the middle class, which had historically been this nation's backbone and shouldered the bulk of the taxes is not just dead broke, it barely exists anymore. The middle class has been declining every year since 1970, from a high of 62% to a current low of about 45%. Adjusted for inflation, income for the middle class has remained nearly stagnate while the top 10% has seen exceptional growth. Of course, the American economy has transitioned from mainly middle class manufacturing jobs to lower income service jobs in the name of bigger profits.

We also have to remember that for the last 20+ years the U.S. economy has been on a defacto war footing, thanks to our involvement in Afghanistan, Iraq, and Syria; a hollow stimulation of the economy. This has had the illusion of artificially reducing unemployment by draining off "excess" workers to the war effort while keeping the economy operating at a steady capacity.

America is also experiencing the highest rate of income inequality in the last 50 years (if not longer). In 2012 for instance, the top 10% took home 50% of total income. The top 1% got 20% of that! The top 10% owns more than 1000% more than the middle class remnant. Meanwhile, the top 1% now owns more than the bottom 90%. Since 2000, the number of Americans living in poverty has continued to increase, mainly from the middle class (which has resulted in more Americans applying for aid through our economic safety net which only the fifth most funded portion of the budget).

Breaking it down by states, those with the highest income inequality were the District of Columbia, New York, Louisiana, Connecticut, California, Florida, Alabama, Mississippi, Georgia, and Kentucky. The top states with the least income disparity? Utah, Alaska, New Hampshire, Wyoming, Hawaii, Iowa, Nebraska, South Dakota, Minnesota, and Wisconsin. Indiana was 15th while Ohio was 26th and Illinois was 40th.

Globally speaking, the United States ranked ninth among the countries with the highest income gap. Not what you'd expect from the "bastion of capitalism" is it? We were just behind (that is, worse than) South Korea, the UK, Russia, New Zealand, the Baltic states of Lithuania, Estonia and Latvia. Some of the countries worse off than the U.S. included Turkey, Chile, Brazil, China, Mexico, Costa Rico, and India. The nation with the worse income gap in the world was South Africa.

So what does this mean for the United States and what, if anything, can we do to stave off disaster? Well, consider this. In 2016, U.S. billionaire Warren Buffett announced that he actually paid less in taxes than his secretary and other employees. He went on to say that his tax rate was just 17.4%. In 2018, U.S. billionaires paid, on average, at a tax rate of 23% while the bottom half paid an average tax rate of 24.2%. In 2018, the average CEO made 287 times more than the average employee. We have corporations whose profits are more than the GDP of many countries, but they pay little to no taxes.

The Institute of Taxation and Economic Policy reported in 2019 sixty Fortune 500 companies which paid zero federal taxes on their collective profit of $79 billion dollars. We're talking Amazon, Goodyear, Eli Lilly, Chevron, Halliburton, Netflix, Delta Airlines, IBM, Gannet, Honeywell, Prudential Financial, Molson Coors, Apple, ATT, and Duke Energy as an example. Others, like Exxon, Pitney Bowes, U.S. Steel, Starbucks, and many other Wall Street corporations paid virtually nothing. Of note is that IBM, which paid no federal taxes, actually got a refund of $342 million. Amazon got back $182 million, while Molson Coors earned a "cold filtered" refund of $22.9 million.

Sound fair? Hardly. But that's how things function under an Oligarchy. Corporations, lobbyists, politicians, and professional bureaucrats all working hand-in-glove to serve each other's interests while taxpayers---you and me---get the bill. The government is living top dollar on our nickel and dime income. This has only one possible outcome. Perhaps that's the reason for the increase in government surveillance, the fake news, the increased militarization of the police, the manufactured conflicts between groups, the crackdown on owning guns as well as freedom of speech and assembly.

Those in the top 25% income bracket need to be taxed at a much higher fixed percentage so that a minimum tax is always paid. CEO's earning 287% more than the average employee? Great, let them pay at a 287% tax rate. In some countries, CEO's are capped at how much they can earn. In the UK it's 22% the amount of their lowest paid employee. In France, it's 15%, and in Germany it's 12%. Why can't we?

What we need is a complete tax code overhaul. We need to go to some form of consumption tax; a tax on which you pay only if you buy. You control your tax rate by controlling your purchases. You don't have to worry about keeping receipts, filling tax returns, or anything else. A tax code for ordinary citizens would be virtually obsolete.

Secondly, corporations need to pay a minimum tax equal to 15% of their gross profits. If U.S. manufacture products overseas and sent them back, then a special import tax needs to be added. It needs to be cheaper to manufacture here in the U.S. than to close an American plant, lay off workers, ship the job overseas, and then send it back here to be sold.

There was once more of an equilibrium between blue collar and white collar pay back when you had stronger unions. Unions, for all their flaws, at least gave employees a voice in the workplace and a means to fight back. That's all but gone. However, there needs to be the adoption of employee associations to pick up where unions left off. Employees need to be guaranteed a voice at the table---literally. Employees should be allowed to elected representatives to the board of directors on a rotating basis equal to 1/3 of the total board.

To reclaim our Republic from the Oligarchy we need to eliminate the nefarious "Citizens United" which gave corporations "personhood" and unlimited financial "free speech", thus eliminating the impact of the voters. We need to impose term limits and end partisan gerrymandering in order to give back some of the elective power to the people. We need to implement voter referendums too. Lastly, citizens must have the final say in any tax or rate increase. Regulatory boards and governments can and should advise; they can even recommend, but we--the taxpayers---must have the final say. We know what's at stake. It's up to us to incur that risk, be it increase in property tax, school tax, sewer rate hike, or increasing the salary of elected officials...or not.

Too often elected officials think the only option is to increase the tax burden on its citizens. They fail to take into consideration the accumulative effect of the increases, along with the increases in other services such as cable, water, gas, or electricity. It's always "just a few pennies" to hear them tell it, but it never is. Politicians, like water, will always take the path of least resistance. Right now that's you and me. We need to change that, and quickly, while there's still time.


18 Facts on the U.S. National Debt That Are Almost Too Hard to Believe

Who Owns the U.S. National Debt?


These 15 countries have the widest gaps between rich and poor