The Killing of Qassem Soleimani: Making the World Safer or Lighting the Fuse for WWIII?

I'll cut straight to the chase and right to the point. President Trump ordered the execution of a cold blooded terrorist. A man who was directly responsible for the murder of thousands of Iranians, Iraqis, Yemites, Afghanis, Yazidis, Kurds, and American servicemen and women as well as civilians. Iranian General Qassem Soleimani was involved in aiding the likes of ISIS, Al Qaeda, and Boku Haram.

They are responsible for the murder of hundreds, if not thousands, of Christians, Hindus, Buddhists, and even other Muslims, plus the kidnapping, rapes and selling of young women into slavery. The final straw for the U.S. was the murder of an American contractor, ordered by General Soleimani. From a moral perspective, the world is far better off by his removal. But is the world any safer? By removing this individual are we any closer to world or even regional peace?

There's no question that General Soleimani, who headed the Quds Force, part of the hard line Revolutionary Guards which serves as a cross between the CIA, the Joint Special Operations Command (JSOC) and Delta Force, was despicable; someone on the same level as a Tamerlane or Himmler. President Trump has received nothing but criticism, ranging from Speaker Nancy Pelosi and members of the Democratic Party to the print and electronic media to the talking heads on television.

Pelosi is miffed that Trump didn't tell her first about the pending attack. But then, President Obama didn't tell her beforehand about taking out Osama Ben Laden either and she was just fine with it. In fact, not only Obama, but George W. Bush had ordered the targeting of key ISIS and Al Qaeda leaders without alerting either Pelosi or Congress and everyone seemed okay with that. In fact, the media never said "boo" to either about it. Now why is that? My guess is that this is nothing more than an ongoing attempt at character assassination; of promoting public distrust of President Trump.

So, what was General Soleimani doing in Iraq on January 3rd in the first place (and at a public airport no less)? His presence there was supposed to have been forbidden by the Iraqis. Well, it turns out that he was there to meet with Abu Mahdi al-Muhandi, the deputy commander of the Iranian sponsored Popular Mobilization Forces, an umbrella organization overseeing the various pro-Iranian militias.

Al-Mudandi had arrived with a small convoy to meet with Soleimani and escort him to a safe location outside of Baghdad, presumably to coordinate plans for future terror attacks on pro-Western targets, including U.S. diplomats and military personnel. Al-Mudanhi and a driver were also killed in the attack. It should be pointed out that the drone attack which took out Soleimani came just days after a failed attempt to seize the U.S. embassy by pro-Iranian militias in Baghdad had ended (that attack was in response to an earlier U.S. air attacks killing 25 Hezbollah fighters).

In addition, under the direction of Soleimani, members of the Revolutionary Guards had seized or attacked several oil tankers in the Gulf of Hormuz, attacked a Saudi oil field, and shot down a U.S. surveillance drone (okay, that may have been justified). Pro-Iranians militias, operating through Quds Force, have also been active in Syria and supplying both Hezbollah in Lebanon and Hamas in Giza.

So now what? Well, in keeping with tradition, Iran responded. They withdrew from the agreement restricting their development of "nuclear reactors" (wink wink) which, to be honest, they've not been following anyway. They also launched a limited missile attack on two American bases in Iraq (no one was killed or injured). Heck, they've even raised their "red flag of doom" on the Jamkaran Mosque in Qom to signify a pending war (this is Iran's largest and most famous mosque).

Nevertheless, while their flag stills flies atop the mosque, Iranian Foreign Minister Javad Zarif said that "proportionate measures" have been taken and the matter is now concluded. He added that Iran didn't want any further escalation but would respond in self defense is provoked further. However, Iran's religious leader, Ayatollah Ali Khamenei, called the Iranian missile attacks a "slap on the face" of the U.S. hinted at possible, more "severe" attacks to come in the near future.

Iran has to be careful in its response. First, to overreact is to essentially admit that Western intelligence was correct about Soleimani's importance as the mastermind behind Iran's attempts to destabilize the region and export its brand of radicalized Islam. Iran, while acknowledging Soleimani as the head of Quds Force, has long denied any involvement in terrorism in the region. Their response must be measured; even downplayed. He must be treated a merely a high ranking general.

Secondly, despite American led sanctions, Iran depends heavily on its restricted oil exports to keep the economy going. Iran has close ties to Russia, China, and North Korea which has helped. So has its limited trade agreement with the EU (especially France, Germany and the UK), along with various Arab nations including the United Arab Republic (UAR). To engage the U.S. in a tit-for-tat conflict could easily disrupt Iran's current trade arrangements, which would plunge the country into an economic spiral for which it might not recover.

At the same time, a enlarged U.S. military involvement in the region could also trigger panic in the West and drive the cost of oil and gas to near record highs (some have predicted as much as $100 per barrel of oil). Despite having one of the strongest militaries in the Middle East, Iran wouldn't stand much of a chance against the U.S. However, Iran would be no Iraq. The Iranians are much better trained and equipped than Saddam's forces thanks to support from Russia and China.

In addition, Iran is the lynchpin in the "We Hate America and Israel" club. Muslims throughout the Middle East and elsewhere, while appreciating the removal of a despot like Saddam Hussein, resent the continued presence of Western forces in the region which is viewed as a "conquering force". They also disapprove of our continued support of Israel. A war could result in Iran being able to unite Muslims and turn it from a political/economic conflict into a religious one (and as any historian will tell you, religious wars are the most ruthless and bloody of them all. After all, you're murdering on behalf your god. How can you possibly compromise or surrender?).

I would expect Hamas and Hezbollah to attack Israel with weapons its stockpiled from Iran. Additionally, it would provide an irresistible opportunity for North Korea to act up as well with a possible attack against South Korea, launch missiles at Japan (which it hates as much as it hates us) or even Hawaii or U.S. territories like Guam or Midway. Who knows, maybe China would use U.S. preoccupation to retake Taiwan. After all, we can't be everywhere and with over 20 years of active military engagement, we're kind of pooped. Our military badly needs time to reset, overhaul equipment and replenish inventory. The burnout rate of military personnel is at record highs (as are suicides).

Lastly, there's home...our home, America. Although Homeland Security, U.S. intelligence agencies, members of Congress, and the media have long known but remained virtually silent on the point that there is the strong likelihood of the Muslim terrorist cells in the U.S and quite possibly Canada, the UK, Mexico, throughout Western Europe.

For that matter, Russia and China likely have terrorist cells as well. Both Russia and China have had ongoing problems with Muslim separatists. There are some 9.4 million Muslims in Russia; mostly living in the southwestern portion of the country. Russia's troubles with the Chechens started back in 1994 and is still going on, with thousands dead and no end in sight. China has been attempting to suppress the Muslim Uyghurs in the Xinjiang Province for a couple of decades now. 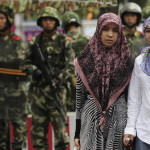 The Uyghur comprise almost 50% of the population in Xinjiang with large pockets throughout mostly western China, including the Hui, Kyrgyz, and Kazakh who are also mainly Muslim. Although no official numbers are kept, it's estimated that China has around 23 million Muslims---up to 2% of their entire population. However, the more pressure applied by the Chinese, the more they resist. Already, almost 1.5 million Muslims have been imprisoned in what Chinese officials called "reeducation camps".

A war or even a serious uptick in hostilities between Iran and the United States benefits no one. It would deeply affect not just the already fragile economy of Iran (and possibly topple their government), but further destabilize the region, and deeply affect the economies of Europe, the U.S. and the rest of the world. It could engulf the world in a asymmetrical war which could last decades and where there would be no winners.

It's even possible, if not likely, that the end result could be a nuclear war. At the very least, it could involve chemical and biological weapons regardless of any so-called "international prohibitions". I don't care what god you believe in, I can't imagine one who would want to see all of humanity either destroyed or reduced to subsistence conditions. We could only hope that aliens would come down and save us from ourselves.

But reality being what it is, this is about oil. It's about gas. It's also about its control and flow. As an aside, Iran had just announced the discovered of an new oil field capable of producing over 56 billion barrels of oil. Think that's a coincidence? The ruling Oligarchy is, as readers of A/O already know, all about the control of assets and resources, which, by the way, also includes us.

If they are unable to acquire control through normal business channels, then they will employ the resources of government, which they control, to achieve their desired consequences, backed by a media they also control, to manufacture a properly suited villain. Add a dash of nationalism, a pinch of fear and you've got yourself the recipe for a military "intervention". Whether it's called a "war of liberation", a "fight for freedom" or "spreading democracy", it's all about control and, of course, profit. President Trump, whether you love him or loathe him, acted on the intelligence presented to him by his advisors and generals, along with their recommendations. Trump was and will always be a businessman. He's not an expert on foreign policy or military matters. Obama, with virtually no political experience and had been a local "community organizer" wasn't either. George W. Bush was a largely unsuccessful businessman and mediocre governor wasn't much better.

All three men acted on what others told them. This is where you'll find the ruling Oligarchy; the "Deep State". It lays within the system itself, which makes the situation all the more dangerous. We can only hope that those who advise the president, whoever that may be, are acting in our national interests with an eye toward preserving Humanity rather than towards short term power and wealth.

'Stick of dynamite in a tinderbox': Why General Qassem Soleimani was killed, and what may happen next


Iran supreme leader says missile attack was a 'slap on the face' of the U.S. but it was 'not enough'.


Analysis: The different stages of Iranian support for ISIS