The Fourth of July and a Few Things to Bear in Mind. 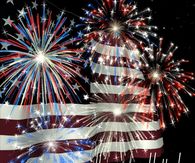 On this Fourth of July, let us remember a certain event involving one of our most beloved Founding Fathers, Benjamin Franklin. The deliberations of the Constitutional Convention in Philadelphia in 1787 were held in strict secrecy. Consequently, anxious citizens gathered outside of what would become Independence Hall. When the proceedings ended, in order to learn what had been produced behind closed doors,
dozens gathered close by the doorway to question anyone they could. One of the first to emerge was Benjamin Franklin. A Mrs. Powell of Philadelphia asked Franklin, "Well, Doctor, what have we got, a republic or a monarchy?" With no hesitation whatsoever, Franklin responded, "A republic madam, if you can keep it". A democratically elected representative republic, if, as he said, we could keep it.

We did for many generations; through wars--foreign and domestic, good times economically and bad ones as well. We fought and argued among ourselves, but we kept our democratic republic nevertheless. But then something happened. Something changed about how we were governed, or perhaps it was us who changed. Maybe it was the rise of divisive factions; political cliques, better know as political parties which our Founding Fathers largely opposed that increasingly divided us. Perhaps it was the rise of a super wealthy business class which sought to usurp the power of the government. Regardless, the power bequest to us by the Founders began to slip from our hands. We dropped the levers of power and picked up television remotes or video joysticks to waste hours at a time instead of paying attention to what was being done in our name.

While we were busy watching "reality" television, sports, and playing on our video games, America slipped into an Oligarchy. A wealthy elite took control of our government. Free speech was replaced with money; whoever has the most shouts the loudest. Those elected or appointed to serve the People now serve new masters--corporations. Power today is maintained not by the Will of the People, but by corporate money, partisan gerrymandering, no term limits, and in many cases no direct recourse such as citizen referendums or voter initiatives. Our democratic republic experiment is little more than a shell now; something we try and pretend is real much like the ancient Romans did after the rise of the Caesars until such time as the farce could no longer be maintained. Today we struggle to define what it means to be an American Citizen or whether we have the right to secure or even have borders!

So, let's take a few minutes from the festivities of the day to remember why we fought a revolution against the world's mightiest nation at the time. It was over taxation without us having a say. It was over censorship of the media and our right to say what we believed, including the right to criticize those in government without fear of reprisal. It was over corruption of government officials, be it in the form of bribes, "loans", or voting themselves pay increases. It was over the right to worship in the faith of our choice, or even having the right to have no religious beliefs at all. It was, after all, the sovereignty of the individual with mattered the most.

It was over ending abuse by government troops who acted as the police of their time, including being forced to provide for their welfare. It was over the right to know what crimes we were charged with should we be arrested, and to face those who accused of these crimes. It was also over the right to a speedy trial rather than to spend months or even years in jails. It was over the right to posses firearms; not just to hunt with, but as our last resort against tyranny; the same tyranny which sought to deprive us of our other rights.