Sports in Transition: Transgendered Athletics and Fairness in Competition

I'm not a huge sports fan to be honest, but what I like, I like a lot. I'm talking about weight and powering lifting, the Highland Games, professional football, the World Strongman competition, the Spartan Games, professional boxing, MMA, the CrossFit Games, kickboxing, American Ninja Warrior, and, well, you get the picture. I played sports when I was younger and still enjoy lifting weights when I have the time. I think sports, or for that matter, physical activity of any sorts is good not just for the body but for the mind and spirit as well. Of course, when it comes to school, sports should never be allowed to trump academics in my opinion.

I also want to address the changes in gender identification and how it's affecting sports. First of all, despite the rantings of the Far Left, there are not 58 different sexes, be it pansexual, transsexual, omnisexual, or whatever else (some actually list as many as 63 different gender choices). There are only two genders. You're either a male or a female. You either carry the Y-DNA or you carry the mtDNA. Everything else is between your ears not your legs. You're free to pretend to be whoever or whatever you want. You are free to have a hormone therapy and "transition" from one gender to another. You can go the whole route and have a complete sex change if that's what you want.

However, you will not change the fact that your basic body chemistry doesn't change, at least not without drugs. You will still produce naturally either testosterone or estrogen; drugs can help suppress one and promote the other. You will not alter your bone structure (ie: wide hips vs wide shoulders) all that much or the fact that males are typically taller than females. You also will not change the your muscle fiber or the fact that males have naturally stronger upper body strength while females tend to be a little faster. Nevertheless, no matter what you do, you will still either be a Y-DNA or a mtDNA carrier and that will never change. So, what's this have to do with sports?

Simply this. We are seeing more transgendered males competing against females in sports. As a result, these former male athletes are starting to dominate their natural female opponents. Even in areas where females should do well, such as track and field, their ex-male competitors are edging out their female counterparts because they are taller and have longer strides. In sports like wrestling, MMA, and boxing, they are pummeling their female counterparts thanks to their natural upper body strength. Thus, I have to wonder if allowing "transitioned" athletes to compete against natural females is a fair contest? Can a natural female athlete compete on the same level as someone who used to be male? It's one thing to change physical appearance, but can it change inherit difference in size or muscle strength? If women could compete with men on the same athletic footing, such as weightlifting or powerlifting, then why is it necessary that there has to be two separate divisions with completely different weight requirements based on gender? Why is there a women's field hockey team and why can't males play on it? The fact is that there are basic differences between the two genders. Could a transgendered female athlete ever expect to compete in the NFL as a defensive linebacker or offensive lineman on the same level as her male teammates? I don't know, but I don't think so. Perhaps in junior high school or maybe high school, but that's about it. Under most circumstances, these differences complement each other, which is how it should be in my opinion. However, when in direct competition with each other, there are going to be unfair advantages to one or the other.

At this point, I think female athletes should seriously consider boycotting matches or events when faced with a former male opponent, and male athletes should do likewise when matched with "transitioned" females (the same goes with those who simply "self-identify" as the opposite sex). If this would happen, sports associations and event sponsors would face a decline in competitors as well as a decline in attendance, which translates to a decline in revenue. The time have come where athletes should not just be tested for steroids and other illegal substances, but also for drugs which affect their natural sex hormones. Perhaps too the time has come for creating a third gender category for transgendered athletes or reevaluating those sports where differences in gender would not create potential unfair outcomes or cause physical harm to a contestant.

I know there are those who believe that there are no real differences in the sexes, regardless of how many genders beyond the original two they think there are, but both biology and anthropology would disagree as would real world competition. The Human species, like all other animals, developed specialties based on their unique qualities. We have advanced scientifically to the point where we can tinker with our own biology. However, there are some things which we cannot and perhaps may never change. Until that day comes, we should appreciate and celebrate the differences between the genders, and that includes the unique strengths and weaknesses of both.

Sports is about achieving your personal best while sports competition is testing your best against an opponent, be that an individual, another team, or an object. Allowing transgendered individuals to compete against a someone who is a biological male or female creates a unnatural advantage for one while handicapping the other. I've watched top females athletes go up against unranked transgendered males in sports like MMA, boxing, Greco-Roman (Olympic) wrestling and get the bejeezus beaten out of them. It wasn't even close to a fair match. Even in sports like weightlifting or track, biology can create a insurmountable advantage. While we're at it, women's sport should received the same about of attention as the males, including funding for school related sports and coaching staff. 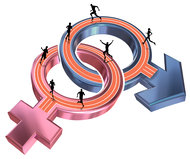 Some might argue that genetics creates an unfair advantage, so what's the difference? The difference is that everyone must deal with their own genetics as dealt to them naturally whereas biology applies those differences differently based on their natural gender. Men and women will always have unique strengths and weaknesses, especially when it comes to sports. We should accept and value those differences rather than impose one on the other. I take no issue with transgendered individuals wanting to compete, but let's make it a fair match up and have them compete against other transgendered individuals or perhaps give a size and weight advantage to the natural gendered opponent.

Gender identity and sport: is the playing field level?