Understanding No-Go Zones: What Are The Outcomes?

We've all heard or seen the term. It often shows up on the news and "talking head" political shows, and even on our social media sites from time to time. It's often used in conjunction with stories about war zones, and more recently, in places where it's simply to dangerous for ordinary people to venture (and just as often, too dangerous for even the police to patrol). But what is it really? What does it mean to have a "no-go zone" in your community, and where are these forbidden zones starting to become more prevalent?
As I said, "no-go zones" are typically found in war zones. They are often referred to as "exclusion zones", meaning that there could be unexploded ordinance hiding in the rubble, as well as landmines (which are the single deadliest weapon when it comes to civilian deaths). It also means that the area is likely unsecure, with a high probability of roving enemy combatants lurking about (especially snipers).
As in years past, these area were often marked with warning signs (like with a large "Warning" in various in various languages, accompanied by a skull and crossbones---never a good sign). Entry into these zone are done so at one's own risk. There is no guarantee that anyone entering these zones will be provided with any type of assistance, be it due to getting lost, captured, injured, or wounded (and if killed, it's very unlikely anyone is coming for your body).

Of course, not all no-go zones are in places of conflict. In fact, most aren't located in or near a active war zone. The majority of no-go zones are actually found in various cities and towns where divergent (and unassimilated) populations attempt to enforce their own laws; independent of existing local laws. This includes roving patrols who harass, detain, and fine anyone who fails to comply. They are attempts to apply their own traditions, culture, and religious restrictions. In some cases, they may even attempt to "arrest" an individual and bring them before a religious tribunal where some type penalty of is applied. It's also common that these communities expand the tribunals into a de facto government.

In addition, this application as described above, usually have the support of the local population. These zones come about when individuals from either the same country or with a similar culture, religion, etc. settled in a certain area and begin to tacitly apply their cultural and/or religious values on their own street, or block, and then join with others to expand it to cover blocks, and eventually entire sections of a community. Typically, this begins subtly; with polite requests and calls for inclusion, tolerance, and openness.

As their numbers increase, these "request" begin to take a change in tone. They start to become more assertive. As the numbers continue to grow, so the growth of likeminded individuals, who bring with them their extended families, their businesses, and (naturally) their biases, traditions, and values. Often, at the same time, as these numbers grow, native populations begin to leave; not feeling safe or disliking the changes they are seeing. At some eventual tipping point, terms such as "tolerance" and "inclusion" start losing their original meaning, and are replaced with words like "compliance" and "dictate".

Somewhere during this transformation, the emerging population becomes unsatisfied with just those within their own community abiding by their value systems, and begin to apply it to others. Again, this usually starts as a "suggestion" or "request" in the name of "tolerance", but after a while, escalates to becoming compulsory, to the point where it supplants local law. Attempts by law enforcement to apply local law, or even conduct routine patrols in these communities, is view as an intrusion; an attempt to impose "foreign" laws on them!

As a result, the migrant population often responds violently by harassing the legal authorities, from verbal or physical threats (and, perhaps some general pushing and shoving) to becoming increasingly belligerent, up to and including open attacks, riots, destroying property, throwing rocks, "Molotov cocktails" or other homemade bombs, and so forth (it's not uncommon that afterwards, these same groups will demand the government clean up the mess caused by the rioters and restore their damaged property).

At this point the area is generally declared a "no-go zone", although governments often attempt to soften the obvious negative connotation of an area uncontrollable by the local authorities and use terms like "sensitive urban area", "vulnerable area", "exposed" or extreme exposed" zones, a "sundown area", as well as "closed zones" (which, by the way, all these apply to the native population, not to the migrants inside the area So when they say "stay out", they mean you). As an aside, there have been several attempts by journalists to cover these areas from the inside. Many who do are often meet with the same hostility unless they first obtain permission from the tribunal, and then only with an assigned escort, who also censor what is and what isn't covered.

So where are these so-called "sensitive" areas to be found? While they're are pretty much located just about everywhere, they are quickly popping up throughout Europe, especially in Western Europe. The idyllic country of Sweden has some 53 of these areas (with 15 of them classified as "particularly exposed" by the Swedish police). Germany has at least 40 such areas according to some police reports; perhaps more. Paris has approximately 25 such no-go zones, with dozens of others scattered about in France's major cities and towns such as Toulouse, Marseille, Bordeaux, and Avignon (one French police officer described crime as a "leisure activity" in these zones).

In the Lowland countries of Holland and Belgium, they too have their "no-go zones", although the Dutch are a bit more sensitive about it and often vigorously deny any such zones exist, though locals will likely beg to differ. The same for Belgium, though locals will nonchalantly suggest outsiders might want to skip the tour through Molenbeek (one local taxi cab driver said felt like a "seething North Africa ghetto" as author Robert Chamlers wrote in a article for the British edition of "GQ Magazine" on June 21, 2017 ).

Norwegian officials also deny they have any "no-go zones", though they might want to check with the local police and citizenry. Police officers have reported several cases of being attacked and "aggressive" responses to their presence (one police officer reported that Gonland, a district of Oslo, was "more Muslim than Morocco". Locals report of roving gangs, often targeting unaccompanied females and gays, amid rising violent crime (sexual crimes are perhaps the most serious issue, and are not just here, but reported throughout European countries with high migrant populations). 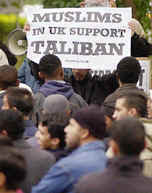 Denmark too has its share of growing "exposed" areas as well as what the Danish Prime Minister, Lars Lokke Rassmussen, calls "parallel societies"; unintegrated communities with their own laws and language. However, the Danish PM insists that he will not allow Denmark to suffer the same fate as Sweden and other European countries, and has refused to permit any majority migrant neighborhoods, and if necessary, will forced integration into Danish society (which I'm sure it will be...kicking and screaming all the way).

Of course, of the countries with the largest number of "exposed zones" is the UK (in terms of dozens through the country). England has perhaps the largest growing non-native populations of any country in Europe, outside of perhaps Germany. In the industrial city of Birmingham, the native population will make up just 48% of the population by 2019 (an entire decade than originally predicted). The same trend includes cities like Leeds, Manchester, York, London, Luton, and others. In fact, at the current rate, somewhere around the year 2040 or 2050, native Britons will be a minority throughout England due to low native birth rates, an increasing external immigration with matching high birth rates (this is known as "population replacement"). As an aside, unlike its fellow European neighbors, at least 2/3 (68%) of the migrants entering the country are Asian, principally from Pakistan, India, and Bangladesh, and not the Middle East.

While this issue of "no-go zones" seems to be primarily a "European problem" at this time, there is no reason to assume it will remain one. Both Canada and the United States has had issues of immigrant populations refusing to integrate. This ranges from the influx of illegal immigrants, to refusal to learn the native language and adapt to local laws. It also includes criminal complicity of individuals, businesses, and organizations (mostly religious) who are intent, for their own gain, to aid and abed these individuals (as an aside, other countries such as Australia, are experiencing a similar problem too. Mexico and South America have had less problems with illegal or unintegrated populations due to strict immigration laws and enforcement).

Although there are existing punitive laws for this, they have rarely been enforced, especially during the eight years of the Obama Regime. As a result, taxpayers have been stuck with the bill, which amounts to some $113 billion dollars annually (some figures are slightly higher and some lower, depending on how its calculated. But regardless, it's still a substantial figure which could be avoided). Europe's "open door" policy has proven to be more than a mere mistake or miscalculation. It has proven to be national suicide. The great Teddy Roosevelt (my personal favorite president) once said that while immigrants, with all their energy and innovation were welcome, this country has no room for divided loyalties. If you came to this country, you did so a future American; hyphenated Americans need not apply. I agree with ole "Rough and Ready Teddy". If you come here with the intent to learn our laws; adapt to our collective traditions, values, and learn the language, then great. Come on in! If, on the other hand, you intend to recreate your country with perhaps a different climate (and especially at taxpayer expense), then I suggest you keep on going. If you're here just to make a buck or two, that's fine too. Just do it legally and get a "green card". We must not become a "Balkanized" America, complete with border checks and "sensitive zones" within our own country. This is the same mistake which has befallen other nations down through history (usually in the name of altruism and tolerance). Let's hope it division is never allowed to take root here.

Are there police no-go zones in France? The police say yes


Europe's no-go zones: Inside the lawless ghettos that breed and harbor terrorists

Stealth Jihad is alive and well in Canada

The Aftermath of Soleimani's Assassination and the Darker Side of U.S. Foreign Policy

On January 3, 2020 a U.S. drone took out one of the world's most ruthless terrorist, Iranian General Qassem Soleimani, the head of the ...