Player's Kneel Down: Loss of Fans and Revenue for Team Players and the NFL

Well, here we go again. It's just about football season and rather than talking about a given team's prospects of winning their division, or who got picked up (or dropped), salary caps, stadium updates, fantasy teams and all that other fun "sporty" stuff, we're once again dealing with what appears to be a recurring blight on America's favorite sport, namely the refusal of some players to show America respect during the playing of our National Anthem. 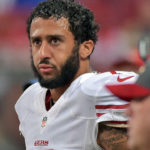 Last year, this alleged "silent protest" directed at the United States, was initiated by San Francisco's QB, Colin Kaepernick among others who later joined in. The protest spread throughout the league like chicken pox. While most players stood to honor America, a decidedly few chose to either sit on the bench, kneel, or kneel with giving the old "Black Power" fist salute, which would seem to indicate that this "protest" was less about policy decisions and more about race. Last year, most NFL coaches, managers, and owners took the coward's way out and simply took no action (a few actually joined in) There were a few who told their player's that if they wanted to play, they were to stand; they could cover their heart with the hand or not, but they would stand. A tiny few number of players simply elected to come onto the field after the playing of the National Anthem, which, I guess, was ok too.

This year, the protest has been kicked off by Seattle Seahawks' Michael Bennett, who called on white players to join in order to play down the protest's racial aspect. Some players have elected to take a knee in a circle and (presumably) offer up some sort of football prayer which most likely included something about not getting cut or seeing their merchandise marketability decline. There's been a few who've been blatantly disrespectable by setting on an exercise bike, doing calisthenics, or pretending to be looking at a playbook. A few owners, coaches, and team managers have stepped up again and said they would not tolerate their player's disrespectfulness toward the flag and what it stands for. Naturally, there has been some who claim to stand by their players and respect their actions. As for the National Football League Commissioner Roger Goodall, he has publicly stated he disagrees with the choice of kneeling but supported the player's "right to protest". 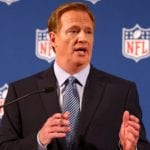 Interestingly, after Kaepernick's protest began to spread, fans voiced their opinions too. The overwhelming majority of them booed those who dishonored the flag. Sales of player specific merchandise also plummeted. Teams with large numbers of kneeing players saw their attendance take a sharp decline. Tens of thousands of fans began switching channels, which apparently will continue to happen. While one would think that the teams owners, coaches, and the NFL would have gotten to together over the summer to address this as a financial issue and stop the hemorrhage of fans and money, but they didn't. I guess they thought (or hoped) that that 2016 season was simply an aberration. However, TV networks were a little quicker on the uptake. As viewership declined, so did advertising revenue. So, in a clever little move, several of the television networks simply stopped including the playing of the National Anthem in their broadcasts. Some also ignored or simply didn't address the topic when discussing those players; focusing strictly on their role as players.

As an aside, colleges, high schools, and in a few cases, junior high schools and unaffiliated leagues saw their players starting to emulate what they were saw on TV or read in sports columns. In many cases the players were copying what they had seen and or heard about without any real understanding as to the meaning beyond witnessing their favorite player(s) do it. Of course, it brought them some attention and what jock didn't like attention, especially if it came from the opposite sex? Touchdown! Shall we go for two extra points or just one?

So, here we are, at the start of a new season with another chance to get back to watching football and talking about stats. But it looks like it's not be folks. I know that some you have no problem with the players taking a knee during the National Anthem. Most of you are probably still in the kitchen looking for the bottle opener or chips and dip, so it's over by the time you get into the TV room anyway. As I said earlier, some networks are simply opting out of even showing the opening salute, so the issue actually becomes a nonstarter for all concerned. As for the players, almost everyone who participated in the protests saw their marketability drop, meaning that they lost money...big money, as did the teams who permitted it, the NFL, and the television networks. Kaepernick, whose stats were never all that great to begin with, was cut by San Francisco, and has yet found a team willing to pick him up. Actions always have consequences. Seattle's Michael Bennett, who has evidently picked up the preverbal sword Kaepernick fell on, is calling for more white players to join in the protests in order to give it "more legitimacy", and hopefully, more support from the fans. I don't think that's going to happen (I need to stress that Seattle isn't the only team doing it this season. At this point, it seems that all of the teams will be affected). Let me tell you why. This so-called "protest" was originally tied to the Black Lives Matter movement and "social injustice" within the black community (with the increasing violence of BLM, there has been an obvious distancing between the "protesting" players and BLM). White players don't have a dog in this fight, and really neither does anyone else.

The fact they are playing a sport for a living, making six or seven figures salaries, lifetime health coverage and having to play...err..."work" for a decade or two tops. Yeah, there are injuries, but they are covered by the best hospitals and doctors in the business. I would also find it hard to believe that many of the black players within the NFL support the action of the BLM. I would imagine they would rather see improvements in the quality of education and creation of more minority owned businesses. As for those players who are on the fence about what to do, they've all seen what happened to the finances of other players (the Bronco's Brandon Marshal lost a very lucrative endorsement deal) not to mention their decline in popularity among fans and coaches.

Now, I'm sure there are some who say these players have a "right" to free speech, and that includes a right to freedom of expression. Well, normally, I would agree. I think that the First Amendment is perhaps that most important "right" we have. But, just like you can't scream "fire" in a crowded theater, there are restrictions to that freedom. NFL players are just like many of you---you're an employee. That means you likely work for a corporate business of some sort. Now, most people don't realize that that the Bill of Rights, where we find the various Amendments, are not automatic.

That's right, your "rights" are restricted by your corporate employer. These players were signed to do a specific job, just like you were. When these players put on their uniform and walk out on the field, they cease being ordinary citizens. They are hired employees retained to do a job. Their personal opinions or beliefs are really of no interest. They represent their team, their fellow teammates, their coaches, managers, and, of course, the owners, as well as the National Football League. So, when they come out on the field and decide to make a political statement---regardless of their intent---it is reflected back on all those just mentioned. To put it another way, when these "employees" come out in their "business attire" and make a political statement which is seen by the ticket buying public and the viewers at home (and indirectly, the advertisers) as offensive, it's not just bad business, but it reflects on the entire team all the way up the chain to Mr. Goodall. For better or worse, kneeling or pretending to be doing something else (or even not pretending), during the play of our National Anthem is like giving America-- especially the military, veterans, and first responders, including emergency room doctors and nurses, and the rest of America (and especially the fans who shelled out big bucks to watch a sporting event, not a political event) "the bird". If you, as an employee, want to protest something that's not work related, you don't do it on company time, in the company's uniform, and in front of their customers. If you, as an player, have a political gripe that's great. I'm glad you're interested in something other than financial portfolio, arm candy, or avoiding jail during the off season. However, do it on your own time---not your teammate's or the coaches and owners, not the NFL's, and sure as hell not on our time as fans.