America Strikes Out? The Result of Hate Politics In America 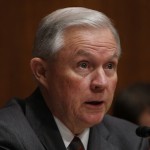 I actually had another topic in mind to be honest. I had planned on discussing the recent testimonies of former FBI Director James Comey and Jeff Sessions. I had planned on specifically pointing out the huge discrepancy between the two testimonies, with specific interest on the fact that there was no covert or overt Russian intelligence operation to throw the Presidential Election to Donald Trump despite repeated drumbeats from the corporate media to that effect as well as from the Democratic Party. However, there was a great deal of evidence that the "fix" was in; however, the fix didn't come from Moscow. It came from the Hillary Camp itself. It came from the DNC Chairmanship. the fix was to derail Democratic candidate Bernie Sanders from mounting a sustainable challenge to Hillary Clinton's march toward her predestined coronation. Then, after Sanders' supporters refused to go into that sweet political night, to deny them any platform at the DNC Convention. The end result was, of course, illusion of Democratic unity toward the velvet room...I mean Oval Office...faded fast. The DNC Chairwoman and Hillary supplicant, Debra Wasserman-Schultz, was fired for the above crimes (chief among them, violating the cardinal Watergate Rule---avoid hiring cheap help). Of course, she was hired the very next day to work on Hillary's campaign. Replacing the (disgraced?) Wasserman was longtime Democratic strategist, Donna Brazile. Of course, it wasn't long before we found that she had known about and leaked the questions of the last Presidential "Debate" to Hillary! Now that folks is what I call a fair and balanced performance.

Anyway, as we all know, all that cheating and lying didn't pan out. After all, didn't we all learn in elementary school that cheaters are losers? Maybe they don't teach that anymore since it might hurt the feelings of the little dears or, given our current political climate, someone might make a "presumptive strike" and start screaming racism. Regardless, Hillary was denied her crowning moment and "The Donald" became our President...whether we accepted him or not. Ever since, the corporate media has been doing daily mudslinging duty to discredit and delegitimize Trump in any way possible. They've challenged every moment, from comparing people who turned out for Obama's Inauguration and Trump's to how he has dealt with domestic and foreign leaders. They've gone after his wife (including her fashion sense), his family, and even his children (which, by the way, is supposed to be off limits regardless). The corporate media has also challenged his staff, their comments, while also critiquing how they went about learning their jobs. 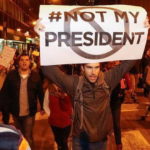 In addition, along with the corporate media's imaginary witch hunting, the Left (including the Democratic Party) has gone all out to foster as much hatred as they can, not toward the Right so much, as toward Trump himself. There has been organized protests openly defying any bill that he's signed, along with refusals to follow any federal laws already in play that they disagree with (specifically with respect to illegal immigration) and proclaiming defacto "sanctuary" cities or states while, at the same time demanding to be given more federal tax dollars to deal with the situation! To do that, and with a straight face, must be some kind of God-given talent. Many of these same baby face protesters have also engaged in trying to shut down streets or highways so they can protest and pound on car hoods or windows (not caring who they endanger or inconvenience) and chants of "Not my President" or "Love Trumps Hate", and then whine when frustrated or frightened drivers hit the gas pedal instead of the brake. These same clueless protesters are egged on by Left to shut down anyone who doesn't agree with the them, be it an invited speaker on a college campus, YouTube posts by conservative vloggers, TV and radio show personalities, not to mention bloggers or the occasional letter-to-the-editor writers.

Worse, perhaps, is that they openly relish their "no free speech" rhetoric. They seem pleased that they have, thus far, been able to bully, intimidate, or buffalo people who disagree with them into backing down. In some cases, they've been able to mount "innuendo" campaigns to bring down some of the biggest conservative entertainment and news personalities such as Bill O'Reilly or Tim Allen's "Last Man Standing" television show. Hollywood's leading faux liberals are a chatty bunch when it comes to saying how much they "hate" or "despise" Trump (especially on the late night and cable talk shows it can be an entire night's routine, not to mention gaggle on "The View").These same individuals also talk about how impeaching or removing Trump from office by force would be great (I don't see their liposuctioned butts doing anything though). Some have suggested killing Trump. There is even a popular stage show which glorifies the assassination of Trump. Seriously. A play which portrays the murder of a US President---Donald Trump---as if it would be a good thing. Would the same thing be tolerated if this was Obama? Or Hillary? Hell, since when is something like this tolerated at all no matter who is the president? Where is the FBI or Secret Service on this? Then we had the Queen of the D-Listers herself, Kathy Griffin, post a picture of herself of the severed bloody head of Donald Trump complete with a deadpan expression. I suspect she thought this was going to be a comedy hit and she would bounce back from her current stint in near obscurity. Instead, it blew up in her face. She has lost what few endorsements she had and everyone of her public engagements have been cancelled. Even Las Vegas. Yikes. Now, Ms Gifford is boo-hooing to whomever will listen about how sorry she is and how "Trump broke me" and "Trump killed my career". In truth, Kathy overplayed her tactlessness and destroyed her own career. Now she will have to deal with the consequences her own actions much like the kiddies above who demand "safe spaces" in some corner to avoid hearing a contrary word or idea.

So, with all this and to be truthful, much more, is there any surprised that some nutcase with a gun walked calmly onto a baseball field on June 14th and opened fire on as many Republicans as he could identify? In fact, in his pocket there was a list of Republicans he apparently intended on murdering that day. The incident itself was almost comical in its surrealism. Here were Democratic and Republican House members out practicing for a charity baseball game--though little known outside Washington---had been held since 1909. It was one of those sunny "no big deal" days, and then the gunman opened fire with a SKS 7.62 rifle and a 9 mm pistol. Though I loathe to mention his name and give him any addition free press, the shooter was identified as James Hodgkinson from Belleville, Illinois and was currently living in Alexandra, Virginia. He was 66 years old and a diehard Bernie Sanders supporter. He was known to openly write on social media pages, including Facebook, rants about Trump, his administration, on Republicans, and on the political Right in general. Ironically, most social media sites such as Facebook or YouTube openly acknowledge that they "monitor" and, if necessary, delete hateful or racist posts, yet it always seems that those deleted are from the Right. Huh. I guess that's just a coincidence . But was Mr. Hodgkinson simply a "nutcase with a gun"? The corporate media will likely try to imply that he was since he was one of their own ideological drones after all. He merely cared out what they, and others of the same ilk were calling for.

I have to say though, who can blame Mr. Hodgkinson? He was a man festering with hate in a political and social environment seething in poison, and he was receiving a fatal dosage every single day from the corporate media---ABC, CBS, NBC, CNN, MSMBC, and yes, even FOX News just to mention the major culprits. He was getting it in the newspapers, online through a politically biased social media of which Facebook and others are grossly negligent in their enforcement. College campuses too are guilty. Once the bastion of open, honest, and critical thought, they are little more Left-leaning conformity inducing cesspools incapable of rational reasoning. Of course, this same line of "education" extends all the way down to elementary school. Words like "critical thinking skills", "responsibility", and "respect" have been consigned to the "dustbin of history" to borrow from Marx. Today, we are seeing some on Left calling for "killing all Republicans" (seriously, including a couple of openly Liberal college professors). I personally don't have a problem with free speech, but something about encouraging people to kill others over their political ideologies that I find unacceptable. It's as stupid as killing people of differing religious beliefs; you know, like ISIS or the Taliban, or the Nazis. In the end, we have six individuals who were shot by a man whose thought process was poisoned by the environment we've created, and it ultimately cost him his life. Was it worth it America? Is this the road we truly want to willingly walk down? How many more people are we going to allow die in the name of political conformity...or extremism? Will this branch off to reverse racism to atone for alleged slights or injustices which occurred over 150 years (and originated by the same people screaming racism now)? Just how far will we allow the Oligarchy which rules this nation through the political elites in both parties to divide us? Congress is up in arms that three of their own---two Congressman and lobbyist---were shot. Never mind that dozens of ordinary people are shot and killed, let alone wounded, every single day in this country. Now that they are affected, they will want things changed and you can bet it won't be to our satisfaction, but theirs. That can't be allowed to happen either. Intolerance, wherever it stems from, must not be tolerated. That doesn't mean we have to accept the other's beliefs or ideas, but it does mean listening with an open mind and accepting what they say as being true for them. We may agree. We may not, but we both have the same right to equal expression and opportunity to freely discuss. If we don't end this now, it will end us as a nation very quickly.


Congressional baseball practice shooting: What we know about the victims

Congressional ballgame goes on despite shooting