It's Good To Be King Part I 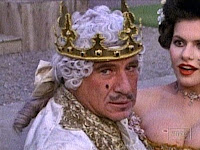 I was talking with a friend of mine recently about politics and current events (as usual). He asked what I was going to write about next? I had just recently posted an article and had started reading various articles and watching videos to see what I found interesting, and what I thought you, the reader, would be interested in. During our conversation he brought up an article he had read about; it's actually more of a game really. The way it goes is actually quite simple. You get to be King (or Queen) for a year. Whatever you say becomes the law of the land. The catch is that it has to be practical. No free pizzas or ice cream, meaning you had to think through your decisions. So, after considering the possibilities, I decided to give it a go. As a disclaimer, none of my comments are set in stone. Situations change. Woe be unto the individual who never evolves. Some may strengthen their opinions while others may change them altogether. Regardless, people should continually educate themselves and be willing to change as the situation dictates. So, with that, let's take a swing at this.

Domestically, there is much I would change. First off, is the economy. As most Americans know, our financial system is not really our own. For much of our history, the US Currency was backed by gold. Our coins was mostly silver. Both metals which have been the measurement of wealth since time immemorial. However, since 1971, when President Nixon ended the convertibility of our currency, the US dollar has been backed solely on the "good faith" in the US Government. That's it. The only value there in the US dollar is based on how much trust we have in the Washington government (which, in that case, means I'm pretty much flat broke). So, the first thing I would do as "King" would be to reestablish some percentage of the precious metal to the dollar. This would make us less dependent on the whims of the international market place and create economic stability at home as well as abroad to everyone whose economics are tied to the dollar. The second thing I would do is audit the Federal Reserve (and that won't go down easy). You see, we, and by that I mean the American People, don't actually control our own currency. The Federal Reserve, which controls things like interest rates and orders the US Treasury to print more (or less) dollars, is in fact a consortium of private banks. True, the president appoints the president of the board of directors, but it's from a list that the board submits, so in fact, the President appoints from a list of pre-approved candidates. In addition, the Government knows very little about what goes on behind the closed doors of the Federal Reserve. Perhaps that's for the best given the overwhelming need of politicians to get their hands on money---any money. Still, I think that the American People deserve to know exactly how and why the board functions. At the bare minimum, the Federal Reserve should provide an annual detailed report of its operations to the American People (note that I didn't say Congress). Close behind would be to institute term limits on Congress, the President, and the Supreme Court. Under our current configuration, the US House of Representatives serve two year terms with no limitations. The Senate serve a six year term with no limits, while the President serves no more than two four year terms for a maximum of eight years. The Supreme Court is an appointment for life. The problems here are obviously many such as consolidation of extreme power and with it the probability of corruption plus a loss of touch with the People. This is more than evident given that we are no longer a democratic Republic, but an Oligarchy. It is also a Millionaires Club. None of these people have any real connection to ordinary individuals, but they do relate to their Corporate paymasters. In fact, most have come from the upper echelons of the Corporate hierarchy and intend on returning as lobbyist, political consultants, or senior partners.

What I propose is simple as the number 12. First, House Representatives would be capped to six two years for a total of 12 years. Senators would be limited to two six year terms, while the President's term of office would be expanded to three four year terms. If you can't accomplish what you want in twelve years, then you're in the wrong line of work. As for the Supreme Court, most of the individuals are already fairly "senior" by the time they appointed to our highest court. It doesn't take long for them to lose touch with the mood of the country and as a result, suffer from a disconnect from what's actually happening in the land. In addition, within a few years of their appointments, many start to decline mentally, which can be a real danger to the nation, not to mention the litigants. Therefore, I suggest no one be appointed younger than 50 years of age. In addition, each should have broad experience as a prosecuting and defense attorney, local or state judge, and federal judge. Their term should not exceed 20 years or 70 years of age, whichever comes first. They gives them a basic maturity, practical experience plus the opportunity to apply their experience while having some level of connection with the "real world" as well as mental clarity to properly do their job.

Next (and this may be the hardest part), I would impose real campaign finance reform. Let's be serious here. Running for higher office is for the rich. That was never the intention of our Founding Fathers. Serving in office was suppose to be a public service; some of our Founding Fathers didn't even want office holders to be paid! Everyone elected was supposed to come to Washington or their state capitol, fulfill their term and return home. The very concept of a "professional" political class like we have now would have been abhorrent to them. First, I reverse the "Citizens United" mistake which allows corporations to buy...err...donate as much as they want to any candidate, especially while still limiting what common citizens can give. In short, no corporate money either direct or indirect. I would try to come up with a way whereby campaigns are publically financed and/or capped as to how much can be spent on a given race. In addition, as in some countries in Europe and other places, I would limit the active campaign season to no more than 120 days. I would prohibit taxpayers from paying for partisan primary elections (that's right folks, you pay for partisan primary elections regardless of how you're registered). Each political party should be solely responsible for primary. I would also do away with signature requirements to get on the ballot. Whatever is required for the two corporate parties---Democrats and Republicans---applies for everyone. Right now, Independents (who are the largest political demographic) and third party candidates have to come up with any from 10x to 100x times the number of signatures to run for same office. That's wrong folks. That's rigging the election. I would also do away with gerrymandering which essentially allows the dominant political party to rig the election by redrawing district lines to ensure that they maintain a majority in a specific district (on this, there is usually plenty of bipartisan cooperation). Instead, I would have a non-partisan third party such a university or the US Census Bureau draw up the districts solely based on population in order to ensure balanced and non-partisan districts. This, in turn, would help to provide more competitive elections. Lastly, I would reassign more local control to state governments since I'm of the opinion that the federal government has usurped power from the states. I firmly believe that the states retain all power except that which they specifically assign to the federal government. Ok, now that we've created a more fair and honest electoral system (and assuming I, as your king, haven't been assassinated by now), let's move on to some other domestic matters. Personally, I think corporations have become too powerful. Think about it. Is there anything they don't control? Perhaps that's to be expected in a capitalistic society. However, I don't think they should control everything, from the media to the environment to government. Do you? Some, like oil, gas, utility, and technology claim they are essential to national security. Well, if that's true, then their private ownership itself put our national security at risk. Therefore, while I wouldn't nationalize these or other industries, I would put them under some form regulatory oversight which would not include any overlapping board membership or other industry related connection. The oversight committee would be completely independent with no input from the industry not requested by subpoena. The oversight committee would likely be made up academics and other specialists. In addition, I would like to see the oversight committees includes social activists in order to keep a balanced perspective. All federal contracts will be paid out as originally bid. By that, I mean if a corporation had a winning bid of "X" billion dollars on a project, that is what the government will pay out. Period. If the contractor comes back and says they messed up and they need another "Y" million dollars to complete the project, too bad. Figure it out. Secondly, if a contract is completed ahead of time, I would see no problem with allowing a bonus. It would be a good incentive and save taxpayers some money. If the project is late, there should be a strictly imposed financial penalty for each day it's late. If there is a problem within five years of a project being completed as a result of something having been improperly done, the contractor is to fix it at their cost. There will be independent audits throughout the life of the project. Any overcharge (like $500 hammers or $1000 commode seats), the contractor will immediately reimbursed the government and face a suspension on the next federal contract (including its subsidiaries). I should add to that there wouldn't be any taxpayer bailouts of private corporations (can you believe the nerve of these people? Running their companies into the ground out of greed and incompetence, then ask for a public bailout, and then to use the money to pay executive bonuses!). I would, however, try to find a way to hold the senior corporate officers and board members liable, either civilly or criminally, for malfeasance.

So, there you have my "royal" domestic decrees! Of course, it doesn't include everything. There's still issues like our prison system, the military, gender, not to mention foreign relations, which I may include in a Part II. I'm sure there's a lot of people who will disapprove of some or perhaps of all of my policies as "King". Then again, there's probably a few of you may actually like some of them (let me know, we'll talk about a possible court advisor position). As an aside, I'm not sure where this puts me on the grossly outdated political spectrum. Perhaps that's a topic for a future article! Anyway, it's good to be King.

The Aftermath of Soleimani's Assassination and the Darker Side of U.S. Foreign Policy

On January 3, 2020 a U.S. drone took out one of the world's most ruthless terrorist, Iranian General Qassem Soleimani, the head of the ...