Politics is a tough business. Many would say it's a dirty business, and having been involved in politics as a community and political activist, a campaign manager and advisor, and occasionally as a candidate, I can't say I disagree. Politics is also a unpredictable business too, despite all the polls and talking heads pretending they've got their finger on the pulse of public. Most, I would say, in actuality have their finger elsewhere, so it didn't come as a particular surprise to me when---much to the corporate media's chagrin--- Donald Trump became America's 45th President. In fact, it was funny listening to the talking heads on election night. They were so convinced that Hillary Clinton would win, they were acting as if her coronation was all but a foregone conclusion. Most were busy talking about all the various scenarios of how Hillary could and would win and who would be in her Cabinet, and what issues she would tackle first. Of course too, for the sake of variety I'm sure, they spent time talking about what would happen if Trump refused to accept the verdict of the voters and what would a contested election look like; would he file suit and ultimately appeal to the Supreme Court which George W Bush did in his race against Al Gore (the Supreme Court illegally decided the outcome of the election in violation of the Constitution. The decision belongs to the Speaker of the House and the House of Representatives).

So, now we have the Democrats and the political Left losing their collective minds. There has been well over a 100 protests and riots, complete with burning cars and businesses, looting, dozens of arrests, blocking streets and highways (never a smart idea), throwing bottles, garbage, and carrying signs reading "Not My President", "Love Trumps Hate", and many more; some quite vulgar. Thus far, while here have been a few confrontations with the police, there has been only one serious injury reported, and that was a woman struck by a vehicle in Oakland during a protest. Some are suddenly called for the end of the Electoral College (which I doubt they actually understand the significance of). most of the protests and riots seem to be located in large cities like Oakland, Miami, Chicago, New York City, Seattle, and a few small cities and towns like Louisville and Bowling Green Kentucky as well as in Paris, Berlin, and London. Russia, on the other hand, seems to welcome Trump's election based on the fact that they believe Trump is someone who is intelligent, reasonable and open minded.

As an aside, some are claiming that billionaire George Soros is behind the protests, or at least behind hiring "professional" protesters and organizers. Some claim it's communists or socialists (the terms are often and incorrectly used interchangeably) while a few like to throw Soros into the mix as well not realizing that communism or socialism would be an antithesis to everything he stands for as a dyed-in-the-wool capitalist, though admittedly, Soros does support some Left leaning causes and campaigns, like that of Hillary's the way the Koch Brothers support those on the Right.

We haven't heard much out of Beijing yet. Perhaps they're taking their usual "wait and see" approach. Meanwhile, many of the Muslim countries aren't too thrilled. I suspect they are reevaluating the billions they invested in the Clinton Foundation while the scramble around to see if "The Donald" has a similar foundation to redirect their... uh..."donations" and contemplate having to absorb the millions of "refugees" they've been trying to force on the West while their refugee camps set completely furnished... and empty. ISIS claims the election of Trump will be a boon to their recruiting efforts. Perhaps so, but I suspect they're going to miss Hillary. She was pretty good for their recruiting and resupplying efforts from what we're hearing from WikiLeaks. Of course, we mustn't forget the dozens of so-called "celebrities" who promised to leave the country if Trump won. While I personally think they were just running off at their mouths and trying to promote a false sense of bravado, given the "sure thing" of a Hillary victory, I believe, however, that in order to maintain what shred of credibility they had, they need to start packing don't you? I'm specifically speaking about the likes of Ellen DeGeneres, Rosie O'Donnell, Jon Stewart, Lady Gaga, Cher, Christina Aguilera, Whoopi Goldberg, Barbara Streisand, Kanye West and the Kardashians (neither of whom I consider celebrities), Lena Dunham, Spike Lee, George Lopez, Amy Schumer, Raven-Symone', Samuel L. Jackson (he can use what's in his wallet to buy a plane ticket) and Miley Cyrus who can leave on her "wreaking ball" to mention just a few. I guess their opinions---and threats---just didn't carry the weight or influence they thought it did. Anyway, hope you all have a nice flight where ever you end up. Oh, but a word of warning. Canada is asking that you all don't come there. Seriously. They are ads running north of the border asking that these whiney ass star-wannabes and has-beens look elsewhere. Isn't that a hoot? Even liberal Canada doesn't want them!

Back on the home front, the devastated Hillary supporters seem to be shell shocked. Some universities, like Cornell, are holding "cry-ins" so that students (supposedly young adults) can sit in a circle, cry, and share their feelings; coloring books and color pencils are being provided---seriously. Some, like at Yale have seen midterms cancelled with either the university or professors providing classroom space and free pizza in order to allow students (and some faculty) so commensurate with each other. I guess if these individuals actually acted like adults, I'd recommend a beer to cry into but I don't think they should have anything stronger than a root beer. In a few other cases, classes have been suspended for the rest of the week while others are seeking out their "safe spaces". Of course, as stated above, some have taken to streets (and highways) to protest and demand a do-over! As one gal put it, "I voted and I didn't win so I have no choice but to protest the decision". That's a girl. Maybe if you hold your breath long enough they'll do a recount just for you.

The worrisome aspect to all this is not the temper tantrums or the fact that anti-Trump protestors are using baby pins (aka diaper pins) to show solidarity with each other, but the fact that some are openly calling for the assassination of Trump. Admittedly, America is not the nation it once was. Heck, it's not even the Constitutional republic it once was. We are an Oligarchy and we're given the illusion of choice, but we've always managed a peaceful transition of power from one party or individual to the next. I think the last time we had this much anger was when Lincoln won! How many protests do you recall when Obama was elected---either time? Yet, me either, and we survived his eight years. I'm a child of the late 60's and the 70's. I grew up watching protests, riots, sit-ins, the Black Panthers, the Weathermen, and the SLA. I participated in a few too. I'm fine with protests personally (but not rioting. That's just stupid to destroy someone else's property), but before running off demanding that someone be murdered or "assuming" that somehow your life or lifestyle is suddenly about to be ruined, don't you think you need to give him an opportunity to prove himself one way or another? We did Richard Nixon, Jimmy Carter, George H Bush and his son, George W. We also gave Barak Obama eight years. Sometimes are fears were justified. Sometimes not. 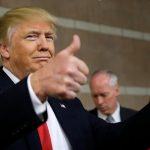 Lastly, I would like to address the Republican Party. Since Trump's election, the GOP Establishment has been acting like Trump's victory was a referendum on Republican policies. Listen, you all did your damnest to defeat Trump. You made fun of him (often calling him a "clown" and his campaign "a circus"). You belittled his proposed polices ( like on illegal immigration and building a wall on our Southern border---remember?) You put up all of your "Establishment" candidates against him. You tried to railroad him out of the RNC Convention. Your Establishment leaders like Mitch McConnell, Paul Ryan, Mitt Romney and the Bushes refused to endorse him. You repeatedly demanded for him to step down right up to the closing days of the race! Even the once "fair and balanced" FOX News showed hits butt when it came to Trump. Trump's election is not---I repeat---is not an endorsement of your policies or values. Trump spoke to the good old fashioned working class values, and RNC, that ain't you. So, before your puff out your (so-called) chests and strut around Washington as if you all did something special, you best recall that We the People know who did what and we see you for what you are---part of the problem, not the solution. So, take a close look at that turkey come Thanksgiving. That just may be you.

A List of Celebrities Who Plan to Move Out of the Country If Trump Becomes President
https://www.youngcons.com/a-list-of-celebrities-who-plan-to-move-out-of-the-country-if-trump-becomes-president/