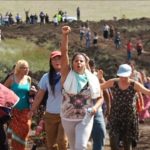 There's an important story which has been unfolding now for just over a month and I imagine most of you have heard little to nothing about it from most of the corporate controlled media outlets. The story has all the earmarks of a lead story--- land thief, environmental endangerment, threats of violence, and of course, villains; in this case a giant petrochemical corporation using government "enforcers" to handle their dirty work. The story I'm talking about is the North Dakota oil pipeline or as it's more properly known, the Dakota Access Pipeline, which is being laid on land it not only doesn't own, but in this case, land sacred to the Standing Rock Sioux Tribe. The pipeline will cover protected federal lands, and along several lengthy sections comes close to central water sources, such as the Missouri River. These water sources not just for wildlife, fishing, farming and domestic livestock, but for members of the Standing Rock Tribe as well (approximately 8500 people inhabit the 3600 square mile Standing Rock Reservation). To make matters worse, the company laying and managing the pipeline has the record for leaks and spillages.

Finally, the oil and gas conglomerate as well as several federal agencies, including the US Army Corps of Engineers, failed to consult with the tribal leadership about the proximity of the pipeline to these sacred areas and water sources. The result has been the largest protest gathering of Native Americans from all across America in decades (and no, there has been no looting, projectile throwing, or burning as in other so-called "protests". The only property destruction at this point as been by the construction company hired to lay the pipeline and US "Federales"). Thus far, just under 2000 individuals have shown up. So, let's delve into this buried story in more depth. Construction on the Dakota Access Pipeline by Energy Transfers Partners, LLC began in mid-August was designed to cover parts of Iowa, Illinois, and both North and South Dakota along a route totaling 1,172 miles (the protests, however, began in early April 2016). The estimated cost of the pipeline, which is mostly above ground, is $3.7 billion dollars. When completed, the pipeline is expected to transport approximately 570,000 barrels of oil daily from the northern shale fields down to the Gulf of Mexico. That's a lot of oil. The pipeline itself will pass within 1/2 mile of the Standing Rock Reservation and cross over 209 rivers and streams. Once completed, Energy Transfer Partners, which is the largest oil and gas transporter company in America by volume, will hand off the day-to-day management of the pipeline to its subsidiary, Sunoco Logistics. According to a Reuters Oil and Gas industry analyses based on US Government data, Sunoco Logistics ranks first in its industry for oil spills and leaks, with over 200 reported since 2010 (the report, however, excluded gas and refined product spills and leakages), which equate to 3,400 net barrels of crude oil. An alternative route was previously proposed but denied since it would have run the pipeline closer to the highly populated city Bismarck North Dakota. The main reason this route was rejected was the pipeline would have run close to several large rivers which services Bismarck's metropolitan area (can we say political clout?). Management for Sunoco publically acknowledged the company's infamous history but claims that changes made to the management team has made for stronger accountability and has reduced the likelihood for possible mishaps, though they declined to elaborate exactly how the change in management lineup would reduce the chances of a spillage or leaks. They pointed out that lines with infrequent usage were the ones with the highest probability of failure and said many of those have been shut down. It should be noted that this is the same company which dumped some 6000 barrels of crude oil into the Kentucky River via its Mid-Valley Pipeline (some of it eventually found its way to a Louisiana Bayou and near a source of local drinking water). In addition, they had several other major pipeline failures in 2000, 2009, and 2011. In September of this year, the company experienced another line failure in Texas which resulted in a loss of 800 barrels of crude oil. The company is presently fighting a proposed fine $1.3 million for violations which apparently resulted in faulty welding. Management also has pointed out the construction of this pipeline is essential for supplying the ever growing energy needs of the nation.

Thus far the protests have been largely peaceful with just under 300 individuals arrested; mostly for blocking access to construction sites or preventing equipment from being moved (such as surrounding or blocking equipment by standing in front and behind it). However, with winter starting to close in and timeline for completion of the Dakota Access Pipeline being threatened, patience ...and tempers are getting short. Therefore, in conjunction to the ongoing--- and growing--- protest, attorneys for the environmental group Earthjustice has filed suit on behalf of the tribe against the US Corps of Engineers on the basis that it was the Corp of Engineers which allegedly reviewed and approved plans for the pipeline as submitted by Sunoco's parent company, Energy Transfer Partner, LLC. In addition, the lawsuit claims that the pipeline is in violation of the Clean Water Act, the National Environmental Policy Act, and the National Historic Preservation Act.

Unfortunately, on September 9th, a federal judge rejected the lawsuit and declined to stop construction of the pipeline. As stated previously, protests against the pipeline began in April although actual construction on the pipeline didn't begin until August. Nevertheless, in July, a petition containing over 150,000 signatures was delivered to the headquarters of the US Corps of Engineers in Washington DC. The tribe received its answer from the Corps when, on July 25th, it approved the proposed plans for the pipeline and gave its ok to begin construction. While the protest has consisted primarily of Native Americans thus far, a number of local ranchers have begun to take an interest in the pipeline too since any possible leakages or spills could have serious consequences for their cattle and grazing lands, as well as their own water use. Thus, on August 14 ranchers filed their own lawsuit to stop construction of pipeline along its present route. Meanwhile, despite the growing protest, the national media has provided little exposure to the situation. Despite setbacks and mounting frustration on behalf of the protestors, the Obama Regime took the unusual step of intervening and requested a temporary (and voluntary) stop order to stop further construction of the pipeline within 20 miles of federal land to give additional time for the matter to be re-reviewed by the US Corps of Engineers in conjunction with both the Standing Rock Tribal leadership and the representatives of Energy Transfer Partners, LLC. It is hoped that this temporary stoppage will give time for a compromise solution to be reached. This situation is bound to be played out again and again as our easily assessable energy sources are consumed by our insatiable appetite for cheap energy continues to grow as well as increasing demand for oil and gas independence from our "iffy" Middle Eastern "allies", whose peak production has long since passed. Meanwhile, these mega-energy producers have done everything they can to ridicule, defund, or acquire and shelve energy alternatives just like the automobile manufactures did to any and all challengers to their dominance in the industry in the late 1940's and into 1950's. With this, we see lumber, mining, and of course oil and gas companies greedily eyeing virgin public lands and Native American reservations. What they promise is environmentally "safe harvesting" of coal, shale, timber, minerals, oil, gas and other natural resources. What they offer is mere "pennies on the dollar" in compensation compared to what they'd have to pay on the open market. Their promise the pre-resource harvesting restoration of the lands with little or no sign they were ever there. Personally, I have my doubts. Their presence would possibly and perhaps irreparably impact the wildlife and overall ecosystem. Besides, existing federal laws require them to leave little to no "footprint" on the landscape anyway. In addition, given the fact these companies are making billions upon billions for management and their stockholders, I think they can do taxpayers much better than just "pennies on the dollar".

As for lands designated to Native Americans, I can think of no reason---absolutely none---that gives any corporations, especially oil, gas, or mining, to go anywhere near reservations. Reservations are not federal land reserves. Reservations are defacto sovereign nations within the US. While they are US citizens with the right to votes and so forth, they have their own tribal governments and their own tribal laws. When I was handling commercial claims, I handled numerous claims which involved businesses owned directly or indirectly by the reservation. In every single case, we had to obtain permission from the tribal government to enter reservation to serve papers, file lawsuits (in which case we also had to obtain the assistance of tribe approved attorney) and so forth. No company, especially one which could, or in this case, has a track record of negatively impacting livestock, water, or grazing be allowed to operate without consulting with and obtaining the permission of the tribal leadership to proceed, just as it would if they were dealing with any other sovereign nation. The US Corps of Engineers or any federal and/or state agency should, at the very minimum, be required to consult with and obtain a written sign off agreement from the tribal leadership of their acknowledgement of the project and approval or denial for it to proceed (it should go without saying but I'll do so anyway, that the tribal government should be allowed to independently negotiate compensation for the use of reservation land, including the removal of any natural resources and restoration on the land).

I don't know how this particular situation will turn out. The Standing Rock Sioux tribe is not especially large, and is, in fact, one of the poorest tribes. The ranchers have some money. Energy Transfer Partners and its subsidiary, Sunoco, have billions. One federal judge thus far has sided with them. Federal and local law enforcement are being ordered to aid Sunoco as well. Still, the people seem determined. This is their land and they are willing to do whatever they can to protect it. Some of the protestors have equated this with "Standoff at Wounded Knee" during the 1970's or to Little Big Horn; neither turned off well for the Native Americans. I hope this is different. They have taken on the chin (to be polite) time and again from the federal government, and now it looks like it's the corporation's turn (which is perhaps fitting since we are no longer a Constitutional or democratic republic, but ruled by an Oligarchy). In some ways, therefore, this fight is a microcosm of our fight as a nation, us versus corporate and/or government usurping of our rights, our privacy, and our property. Here's hoping the courage and wisdom of Sitting Bull, Geronimo, Cochise, Tecumseh, Chief Joseph and Crazy Horse makes itself felt and the protestors emerge victorious...for all of our sakes.