The Illusion of Choice: Surveys and Polls

A few nights ago the AFL-CIO called me with one of those pre-recorded surveys designed to sound like a "real" person was on the other line. I'm fine with that. I actually don't mind answering their questions (at least some of them. They are certain questions that I 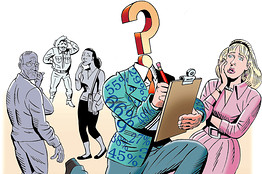 won't answer such as household income). Nevertheless, this survey centered on the upcoming Governor's race.

The survey started off by thanking me for my willingness to participate and added that I had been "chosen" because of my political participation in the past. While I didn't realize there were folks keeping track of my previous political involvement, I decided to play along. The first question asked me if I was aware that Republican Matt Bevin and Democrat Jack Conway were running for Governor of Kentucky. However, no mention was made of the Independent, Drew Curtis, which I found odd.

The next question asked me if I was Democrat or Republican or unsure. As everyone knows, I'm a Independent, so I guess that puts me in the "unsure" camp. Apparently whoever put the survey together doesn't consider Indies as a valid political philosophy or is aware that Independents are the largest voting bloc in America. The next question asked me if I leaned Republican or leaned Democrat. Well, like most Americans, I'm a Centrist. Is that Left leaning or Right leaning I wondered? Fortunately, there was a third choice----unsure, which was apparently inserted in case the respondent couldn't make up their mind whether they preferred to be accused of being a "Socialist" or a "Nazi". The reason I selected "unsure" is simply because I don't believe the political Left or the Right has got it right. Like most people, I support the Left on some issues, mostly social and the Right on other issues such as small government and tax overhaul.

I was then asked who I voted for in the last presidential election---Democrat Barack Obama or Republican Mitt Romney or the ubiquitous "some other candidate" as if there was really just two choices but if I had to be difficult, I could pick someone else. I really had a hard time trying to imagine who in their right mind would admit voting for Barack Obama these days but then again, who in their right mind would admit voting for Mitt Romney? It reminded me of being a kid and having to chose between chocolate or vanilla ice cream when all I really wanted was strawberry. So, I dutifully picked "some other candidate".

I guess they weren't satisfied with my answers, and so in another attempt to pin me down, I was asked who I voted for in the last race for governor---Democrat Steve Beshear or Republican David Williams, or (again) "some other candidate"? Well, once more, I opted for the latter just to maintain the consistency. After all, if I was going to buck the system, I wasn't going to be wishy washy about it. The survey closed with the usual questions "for statistical purposes" so they can attempt to identify their demographics (which is kind of interesting. If I was "selected" because of my past political activity as they said at the beginning of the survey, wouldn't they already know my demographic values?). I was asked to select an age range, which I did. The worse thing about that was that I was second from the last grouping ("65 or older"). That sure didn't help with my self-esteem. It made me feel as if I was slowing being ushered of the stage! Anyway, they asked my race (including "other" and "decline to say" which I thought was pretty cool). I was then asked to identify my gender. Apparently you still have to chose between male or female. (sorry Bruce...err...Caitlyn), and my zip code. I was a little surprised they didn't ask for my highest level of education completed, but maybe "skoolin" isn't considered an important value in determining potential voters for Governor.

This wasn't the only gubernatorial survey I've received recently. A few days before this survey, I received a "live" phone call from a somewhat husky sounding female who was calling on behalf of the UAW. I have to admit, this was a much more pleasant phone call. I guess that's because I was speaking with an honest to goodness human being, which made me like my opinion was a bit more important than the pre-recorded ones I get from an autodialer. I suppose that's also because I can ask questions back, which I consider important given my quizzical nature. The caller thanked me for taking the time to answer their questions, and volunteered that I was chosen because I was identified as "politically active", as well as "Democrat leaning" and a union official, which I found interesting on several levels.

I haven't been a registered Democrat since 2003 when I was forced to switch due to some unremitting harassment the local party refused to address for not actively supporting my 2001 Metro Council opponent (he had switched from Republican to Democrat at the behest of the State Democratic Party even though he had never been involved in politics or a consistent voter. In addition, I had been asked to run for Metro Council by the local Democratic Executive Committee and other local party leaders). I had been a long time mid level officer in the local Democratic Party organization and a prominent community activist, however, the state party leadership didn't think I could be controlled and wanted someone else. I had also been the state chairman of a national writers union for several years and served on the national steering committee as well as having served on the veterans and Victory Pac committees plus the AFL-CIO Central Labor Council (my wife is also a retired Teamster). After that, I was aggressively recruited to run as a Republican for State Representative in 2004 against a sentimentally popular but unproductive Democratic incumbent of some 30 years (though I lost the race, I came within 1500 votes of winning in a strongly conservative Democratic district, which resulted in him opting not to run again). However, I've been "clean and sober" from any political party since around 2008, though I've kept my contacts on both sides.

Nevertheless, the questions were much like the other survey I mentioned, however, I did get to ask a few questions of my own. Specifically, I asked what kind of responses they were getting. She said most people had indicated little interest in the race. Most were focusing on the presidential election, especially on Donald Trump. She added that "The Donald" seems to have tapped into an underlining current of distrust bordering on distain for the federal government and especially on Obama. She also mentioned that of those who were keeping up with the gubernatorial race, most of the respondents held negative opinions about both Jack Conway and Matt Bevin. I asked about their feedback regarding the Independent, Drew Curtis (I had noticed that no mention of the Independent was made in either survey). She said that a number of those familiar with the race mentioned that they supported or leaned toward the Curtis. A few who didn't recall Curtis' name also indicated they wanted to know more about the third candidate. Obviously, there's a couple of factors going on here. First, neither Bevin or Conway are particularly strong candidates. Conway has run for just about everything but keeps losing. People just can't relate to him and Conway, no matter what office he's running for, comes across as a spoilt rich brat with a sense of entitlement. Matt Bevin seems to be popular with the Kentucky Tea Party set and the anti-Mitch McConnell and anti-GOP Establishment clique. However, Matt just seems to be unable to get his message out to a wider base, especially across party lines. Perhaps part of this is because people in general are sick and tired of "good ole party boys". They see both parties as inept, out of touch, corrupt, beholden to the corporate oligarchs and one percenters who are running America now. Of course, both parties continue to lose members while third parties and especially independents are growing. Indies are now the largest political segment of America, followed by Democrats and more distantly, Republicans. Within ten years, Indies are expected to outnumber Democrats and Republicans combined. 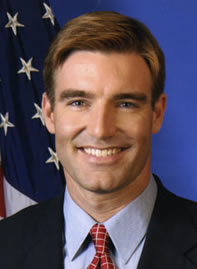 I guess the reason why neither survey (and I suspect this holds true for other surveys being conducted on the governor's race) mention the Independent's name or positions is because the race between Conway and Bevin is tight, and just perhaps, the sponsors of the surveys are trying to make voters think they only have two choices for governor. Perhaps too they are attempting to condition voters into choosing an "R" or a "D" as if that's all that matters when the reality is just the opposite. Even when it comes to debates, third party and independent candidates are rarely invited as if they candidacy is publicity stunt. Few people realize that the national Democratic and Republican parties have worked out a deal to keep everyone else out of the limelight and off the stage ever since they were grossly embarrassed by Ross Perot's performance. The corporate news media plays along and downplays, ignores, and makes fun of just about every third party or independent who comes along. It's like being onboard the Titanic and throwing ice cubes at the approaching iceberg! All the Indies and third parties are truly missing is charismatic candidates with a good campaign organization. Of course, they're going to need money, however, the corporate oligarchs who control the power in this country also control the money flow in politics (remember the Citizens United misruling by the not-so-Supreme Court?), but it can still be done.

I think it's time that the average voters takes third party and Independent candidates more seriously. Obviously, like most of us, they're are just as fed up, turned off, and discouraged by our broken political system as everyone else is, except they're willing to step forward to try and do something about the mess both parties and their benefactors have created. Most are closer to our ideals about common sense government than either party and let's face it, with more people leaving the other two parties and registering as Independent, the political tide is on their side. Besides, if the corporate news media and both political parties are so opposed to them, they almost have to be the better choice by definition! Finally, remember that the only endorsement which ultimately matters is your vote.