When is Terrorist actually a Terrorist?

"A rose by any name". That's part of a famous line by English playwright William Shakespeare from his 'Romeo and Juliet' . The rest of quote speaks of sweetness. The question I ask, "When is a terrorist actually a terrorist?" isn't so sweet. It often smells of fear and of death. Terrorism has been around since there's been oppressors and the oppressed. Modern terrorism, in large part starting with the PLO, Black September, Baader-Meinhof Gang/Red Faction, and even the SLA and the Black Panthers is a matter of theater, much like the protests of the same period (I don't include the IRA here since their actions rarely involved the media and was aimed strictly at inspiring fear). It is at once the theater of the absurd and of the desperate; of those who believe they have nothing to lose. Its purpose is to create a form of morbid sensationalism between an event starving media, the group trying to call attention to its perceived wrongs, and a public, which is both horrified and at the same time, unable to divert its attention. That really is nature of modern terrorism; to compel the public's attentions to a group's plight by using the media as its willing accomplice. 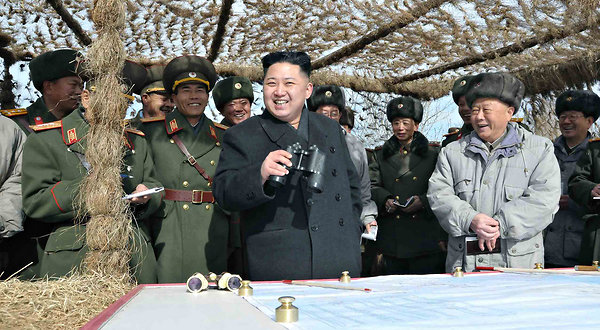 Typically these acts carry a demand of some sort---return of land; recognition of rights; provided with food, medicine, or whatever. Some nations engage in a form of implied terror like the "Hermit Nation", North Korea. Here we have a country time-locked in the mid-1950's with a failed political and economic system that even hardcore Marxists have long since abandoned. North Korea has no industry to speak of, unless you count the military. It's closed most of its universities and sent it students off into the countryside to work farms using mostly mid-century (20th century that is) technology at best while its population slowly starves to death. The only other "industry" which seems to be prospering is the State's "blackmailing" business. This is where the State inspired terrorism comes in.

Every "red" cent North Korea can scrape together goes into it military and its questionable nuclear program. Every so often North Korea rattles its saber and threatens to accelerate its development of nuclear warheads to deploy against South Korea, or Japan, or the US or whomever. They even launch middle range missiles with mediocre success from time to time to prove their sincerity unless the West (and in particular the US) agrees to interest free "loans" (handouts actually), food, technology, medicines, and so forth, and so far, the implied threats have works. Other nations, including Iran, have tried the same trick and have been more or less successful. Typically, however, they found it safer to simply sponsor outside terrorists organizations.

These days we seem to have another form of terrorism---religious terrorism. The core hasn't really changed that much---do something drastic to get the world's attention and then make a demand along with some additional threat if their demands aren't meet. In this case, we have Moslem terrorists who are attempting to return their region of the world to the 7th Century (with the exception of the technology for a privileged few). In making their demands, they're reverted to some good old fashion tactics from the 7th Century like beheadings and crucifying. It's cheap. It's brutal. It's bloody. It makes for good media. It demands to be allowed to subject unwilling peoples to a version of the Koran the inhabitants simply aren't interested in along with a "holy war" that few want any part of. This differs from other others of terrorism in that these individuals don't have the support of the population or the assured long term assistance of terror sponsoring State. The problem with this action is that while the impact is powerful, it's not lasting, no matter how many are murdered or how gruesome. The public's attention span simply ain't what it used to be the 700's. Secondly, instead of inspiring fear and dread, it inspires hatred and determination to resist. In addition, it provides tinder for the subjected populations. Lastly, it requires a long term strategy. In today's world, Capitalist economies thrives on this kind of wartime economy fighting terrorism engenders. In other words, over the long run, the Capitalist oriented economies adapt and improve while the terrorist organization never gets an opportunity to solidify its holdings; its victories become like sand.

Finally, the "or else" part of the terrorist's agenda. Historically, it's been to keep doing whatever its been doing but only more so. Here the aspect of "religion" enters the picture again. While its central to the domestic aims of the terrorists, they have added an additional dimension by threatening to force the West into converting to their version of Islam or be subjugated. In this modern application, the terrorists have made impressive use of social media at a time there's is a lackadaisical immigration policy which has allowed immigrants from various Moslem countries to enter, thus creating a heightened perceived threat. Now whether these Moslem immigrants subscribe to their form of Islam of not is the catch. The terrorists will claim they do while the West simply doesn't know for sure. Most likely, if history is any guide, they don't but they also lack the moral fiber to resist; to put it another way, they'll go whichever way the winds of fortune blow. One thing is certain. The number of Moslems and Mosques are growing rapidly, especially in Europe while here in the US, we have no political leadership; no political will; and no political rudder coming from either party.

There is one other factor I would like to add which stands out. Historically, most acts of terror are confined to the country or region in question such as forcing the British out of Ireland (or since 1917, out of Ulster) or India, or the French out of Indochina or Algeria for instance using a native participant--an Irishman, Indian, Algerian, etc. Here, the terrorist have used social media to "self-radicalize" individuals (usually those who are mentally unstable, or feel somehow threatened or weak) in host nations. These are the so-called "lone wolves"; individuals who, largely through social media sites come to embrace this ideology and ultimately their goals. Many first convert and seek to make connections through various Mosques and the Moslem community. To them, it appears to "solve" whatever ails them, but like any other drug, it has a wicked kick.

Then they start to prepare themselves psychologically, which often includes breaking with family and friends; changing their self-identity---what they read, their habits, even their style of dress or diet. Part of this break includes losing their respect for society as a whole and transitioning into a "us vs. them" mentality. They start seeing everyone, even their country, as "the enemy"; one could think of this as something of a metamorphosis of sorts, except that instead of a butterfly of peace emerging, a twisted killer takes flight. Some may try to acquire skills to accomplish their self-induced "sacred" duty while others simply go with what they got.

As if to downplay its affects, the Obama Regime has sought usage of "Orwellian speak" in defining who is and what isn't associated with terrorism. Canada's Prime Minister has been quick to call to recent incidents what they are, "acts of terror" and although New York's Mayor and its Chief of Police has called its recent event as "terrorist act", the Obama Regime hasn't made that determination yet, and for the time being appears to be leaning to so-called acts of "domestic violence". Not too surprising. In what were clearly previous acts of terrorism, the Obama Regime has chosen to chuck the facts out the window in order not to "offend" Moslems abroad (I'm speaking here of Major Nidal Hasan and Ft. Hood, the Boston Marathon Bombing and approximately 60 other acts of violence committed on US Soil by Moslems not including the butchery known a "honor" killings). Perhaps too President Obama or his advisers are afraid of raising the ire of the American Public which would be equally as swift and brutal. Anyone who commits or attempts to commit an act of violence in the name of a religion which has sworn to destroy us, our way of life, our values; or because of our religion (or lack thereof), or to enslave us is a religious terrorist. Nevertheless, whether or not the President, or his advisors, or Congress have the backbone (and as a rule, they do not) to call it like it is, doesn't change the facts.

America may not always be right in some or even most of the things it does. We've made some serious foreign affairs blunders, including coups to overthrown popularly elected governments because corporate interests felt threatened or were denied access to certain resources. Often the US government acts in ways that are contrary to the demands of the American People (take illegal immigration for instance); it acts all too often to serve corporate interests more so than the Peoples. However, the American People themselves are perhaps the most generous and giving this world has ever known, and despite currently having an incompetent federal government, if there's one thing any foreign "rouge" nation, terrorist or wannabe terrorist should know---the American People don't take any crap off anyone. If there's any questions on that point, ask the Japanese. They know what it's like to "tell it to the Marines".

If you haven't voted in our poll, please be sure to do so. They are located in the upper right hand corner. The poll will be closing on October 30th. Thanks!