The Expanding Crisis in the Middle East 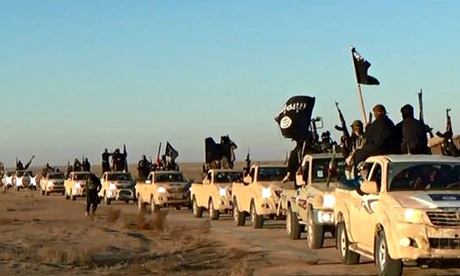 There's no question that the situation in the Middle East is getting worse. Every attempt to stabilize the situation, whether by Israel, the US and UN has failed as has attempts made indirectly by the Turkey, Egypt, and Iran. The Taliban in Afghanistan is essentially back to where it was before the US intervened. Iraq, long a powerful buffer state under Saddam Hussein, is ruined. The best case scenario now appears to be a divided nation between the Kurds to the North, the majority Shiites in the South, and the current threat, the majority Sunni ISIS, whose intent is to create a radical Sunni theocratic state.

Iran, which is mostly Shiite, sees this latest gang of thugs as an immediate threat to their plans for the Middle East as ISIS seeks to create a regional caliphate, which I suspect doesn't include Shiites--Iranian or otherwise. As a result, I wouldn't be surprised in the least to see either Iran or its surrogate in Lebanon, Hezbollah, to directly confront ISIS. However, this could have far reaching complications since ISIS is believed to be supported financially by Saudi Arabia, a key oil exporter to the US and supposedly regional ally. ISIS is rumored to have been, at least in the beginning, like Al Qaeda, a creation of the CIA. Without a doubt, it is an offshoot of the terrorist organization, however, Al Qaeda has publically disavowed ISIS as being too extreme. Now that should send shivers down your spine. Nevertheless, if true, any potential American engagement could have an impact on the flow of oil. Any interruptions or hint of interruptions will mean increased prices for drivers at the pump and with winter approaching, higher fuel oil prices to heat homes and businesses. At present, ISIS is in control of large swaths of territory in Iraq and Syria, where Assad's government retains power and appears to be holding its own for now.

However, with all this ongoing violence, one group in particular has come under immediate threat---the 100,000 or so Christians living in and around the capital of Mosul; a small portion of the some 1.2 million Iraqis who have thus far been displaced. ISIS has publically stated that all individuals who fail to convert to their version of Sunni Islam will be killed; the men generally beheaded and the women and children brutalized, raped and often sold off if not murdered outright. Thus far, some 130 Christian children have been reportedly kidnapped by ISIS. Those who convert must also pay a special fine. ISIS has shown its willingness to follow through with its threats, and hundreds, if not thousands, have already been crucified or beheaded, with their heads being placed on fence posts. Meanwhile, churches and non-Sunni Mosques are being destroyed or converted.

Now, with the fall of Mosul and the historical city of Qaraqosh, the largest and second largest cities in Iraq respectively, there are no longer any Christians there for the first time in 2000 years; the surrounding towns and villages too are empty of Christians. Meanwhile, other minorities such as the Yezidi and the Shita Moslems, who are also facing genocide, have fled north into the Sinjar mountains where they hope to eventually find shelter in the Kurdish controlled region of Iraq as while Kurdish paramilitary units from Syria and northern Iraq have moved south to help protect the fleeing population of some 300,000. ISIS units have repeatedly tried to cut off the fleeing refugees with missile and mortar attacks.

Amid this chaos, desperate calls have gone out to the UN, the US, the UK, and numerous religious organizations for humanitarian aid. If it's not received quickly, there is the strong likelihood of death as a result of inadequate food, water, medicine, and shelter. It will also mark the end of Christianity in the region as well. The US has provided some minor initial support by bombing ISIS missile batteries which have been used in murdering those sheltering on the barren mountain side while additional US planes have dropped some critically needs supplies. The hard-pressed Iraqi government has also air dropped some aide but none of this is anywhere near enough for their survival.

Unfortunately, Iraq hasn't been the only place Christians and other minorities have come under siege. Under the Egyptian President Morsi, the Moslem Brotherhood (of which he was a member) turned a blind eye to violent attacks, rapes and murders of the historically peaceful Christian communities along the Nile. There were several reports of young children being taken from Christian families and sold, after being forcefully converted. It wasn't until the Egyptian military removed Morsi from power did the level of attacks stop. However, the hatred and random acts of violence continues. This same scenario has been repeated in Libya, Tunisia, and more recently, in Nigeria where another Islamic terrorist group, Boko Haram, has laid siege to several villages and killed thousands while capturing young----some as young as 7 years old, mostly Christian, girls for sex slaves; some as young as 10 are being used as suicide bombers. A few have managed to escape, but the fate of the others appears grim. Meanwhile, the Nigeria military appears to be unable to do much of anything to prevent the attacks amid reports while facing charging of their own of murder of thousands of Nigerian villagers amid corruption, ineptitude of its leadership and poor training and equipping of its soldiers.

Of course, these are merely excerpts to remind you, the reader, of what I've previously written, namely that the West, and indeed the East, are in a openly declared "holy war" with the teachings of a radical no holds barred form of Islam. These individuals don't want your Madison Avenue fashions. They don't want your consumer based capitalism or your utopian communism. They aren't interested in your compassionate "live and let live" philosophies, and they 're especially not the least bit interested in your democracies in their various forms. These individuals want from you nothing less than your complete and total subjugation to their version of a Islamic theocratic state or your death.

Gone will be your freedoms; your color TVs, music, styles of dress, books, video games, movies, and much of what you now take for granted. If you're gay you're dead. If you're female, you will lose all personal rights. Even your right to drive or go anywhere without a male escort will be gone. There will be no liquor. No smoking. No pork. Even many of your favorite sports will be gone (and ladies, you won't be competing anymore so don't worry). You won't be able to buy them off no matter how much you make. You won't be able to make any "deals", and the only "understanding" you'll reach with them is your immediate acceptance of Allah or your immediate death. You see dear reader, they firmly believe they are fighting for their god, and, therefore, one cannot negotiate or compromise because God doesn't negotiate or compromise. They unwaveringly believe that every Christian, Jew, Buddhist, Hindu, atheist, pagan, Taoist, Humanist, or non-accepting Moslem they kill is a guarantee of their admission to heaven, so how can you expect to argue with their logic? America, and indeed the world is facing a growing and very dangerous threat. The only question is whether we have the will to fight for what we believe---our faith; our form of government; our culture; our collective values; our families. I don't know about Mumbai, or Moscow, London, or Berlin, or Beijing, but the government is Washington has shown itself repeatedly to act to slowly, if it acts at all. It's interest, now that we've lost our democratic republic to the Oligarchy that is the 1% and global corporatists who control it. is that we, the ordinary hardworking working men and women who built this nation will be sacrificed to buy them time as we have so many times before. So, America, what are you prepared to do?