Under the Wire: Marie Colvin's Last Assignment, A Book Review 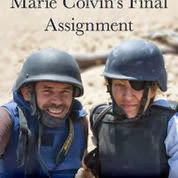 War. It terrifies us. It freezes our very souls. Yet, through our better angels, it can call us to bear witness to its inhumanity and speak out against the carnage while giving voice to those silenced by the vacuum of destruction and death through words and images. War correspondent Marie Colvin was one of those better angels for whom hundreds could tell their stories, and it was through the masterfully told book "Under The Wire: Marie Colvin's Last Assignment", that her fellow war journalist and close friend, Paul Conroy, bears witness for her, lost friends, and comrades born of war. In a gripping and all too real adventure, Conroy takes us from the relative tranquility of a Beirut bar into the coldly calculating meat grinder of Assad's ongoing war; a war which knows no distinction between rebel or child or, ultimately, journalists.

Paul Conroy is a freelance photographer, who often works for the British newspaper, The Sunday Times. It is his job to convey to the world the frozen images in the mists of survival against an onslaught of unimaginable ferocity. In doing so, Conroy shows the world both the savagery of war and the human will to persevere. Marie Colvin was an award winning correspondent for The Sunday Times and author who covered the killing fields of Chechnya, Timor, Libya, and Sri Lanka, where she lost an eye and gained an eye patch and solidified her near mythical no holds barred reputation as a world class journalist. Theirs is a select few who routinely risked their lives in some of the world's most dangerous places to expose what governments, dictators, and tribal leaders deny, cover up---the massacres; the genocides; and the wholesale slaughter thousands of innocent victims.

Conroy's book, "Under the Wire: Marie Colvin's Last Assignment", calls out for our condemnation of war's inhumanity, while sharing with the reader the dedication of those who risk everything to bring the truth behind the offical statements and press releases. We owe it to ourselves to read this book; to learn the reality behind those 10 second sound bites and flickering images on our nightly news. But be warned. Once you start down this journey with Mr. Conroy, you won't be able to stop; you won't want to stop. Each page will drive you forward to the next. You'll be sweep away by the images created through this brilliant telling of Marie's and Paul's descend into a hell known as Baba Amr.

This is one of those rare books that you will want to share with your friends. But by the end, Paul Conroy's "Under the Wire" will have changed you. You'll understand consequences of modern warfare for what it really is. It will make you want to delve deeper into what you see and hear in the media and learn what's really happening in the world. So come along with Paul Conroy and become a witness to the greatest tragedy the world has seen in generations.