I’m one of those people who don’t believe the media should endorse candidates. Now, before you start hyperventilating and sputtering about the 1st Amendment and all that, let me explain why.

I believe it’s the role of the media---print and electronic---is to provide a balanced story and let the public make up their own minds. The fact of the matter is that the public, on average, checks a minimum of three sources before making up their minds. In the case of print media, all that’s needed is a Voter Guide providing a brief biography of the candidate, contact information, and their answers (unedited) to key questions. If the reader has additional questions, they can (and usually will) check alternative sources, including contacting the candidates direct.

Today, most editorial boards pretend they aren’t biased. They rarely print the questions and often publishing edited answers, or answers out of context of the question in order to create a false impression (I’ve been through the interview process. I speak from experience). Then, by the magic of innuendo, they endorse the “better” candidate, who just so happens to fit their political agenda. And how often are the names and political parties or political leanings of the interviewers ever mentioned? Not much I imagine.

So, it’s really not a 1st Amendment issue with me. It’s more like a fairness issue. I just don’t like the idea of a “big brother” trying to manipulate me into voting for someone. Lastly, I urge to write your local editor and ask them to stop making candidate endorsements. All we need are the facts, not their opinions. And most importantly, check out the candidates and their position on the issues for yourself. Don’t rely on one (usually biased) source. The more informed you are the better government we’re going to get. There are several really interesting election stories happening here in Kentucky; the most important of which features Republican Rand Paul and Democrat Jack Conway duking it out for outgoing Jim Bunning’s Senatorial seat. Conway’s crew has pulled out all stops to make Paul look out of touch with Kentuckians and was the first to go negative. Paul has lead in the polls from the start. The more negative Conway gets, the better Paul does. Paul appears sincere, while Conway, by contrast, comes across as a snotty spoiled rich kid. I look for Rand Paul to win.

3rd District Congressman John Yarmuth (D) is defending his seat for the Third District from Todd Lally (R). This has been a surprisingly low key race. Yarmuth is an unabashed liberal Democrat who has proudly supported Obama’s programs. Lally has some excellent credentials. The mood and tide is with him, but I haven’t seen the aggressiveness he needs to win. I think Yarmuth keeps his seat. The race in the 46th District for State Representative between Democrat Larry Clark and newcomer Brian Simpson is shaping up to be quite a fight. Clark has been around forever, and a lot of his constituents have grown tired of his arrogant and bullying ways. Brian Simpson just might be the man to send Clark packing.

For 38th State Senate, the long serving Dan Seum (R) should have no trouble beating Marty Meyer (D), a former aide to Congressman Yarmuth In the 38 House Seat, Democrat Tim Firkins is battling the Republican Mike Nemes. Tim has been a Democratic fixture for decades. Mike has a lot of energy and great ideas. The biggest complaint about Tim is that he’s never around. Mike Nemes might pull off the biggest upset in this election cycle. Even if he doesn’t, I look for Mike to be back in 2012. In the 37th House race, Wade Hurt (R) and Jeff Donahue (D) are running to fill the open seat. This should be a “no-brainer” for residents looking for some actual representation for change. Wade Hurt should handily win this seat.

For the first time in 20 years, we’re going to get a new mayor! Louisville has long needed a breath of fresh air. We are sick and tired of the same worn out ideas. Our choices will be Metro Councilman Hal Heiner (R) against businessman Greg Fischer. This is going to be a tight one. Both candidates bring a lot to the table. Greg has a huge financial lead over Hal, but despite the money advantage, polls have this almost a dead heat. Given the momentum of the country, Heiner may pull this one off. If he does, he’ll be the first Republican mayor since 1969.

While I will be writing more on the other races in my article, I’d like to briefly like to mention one Metro Council race. I expect most of the incumbents to hold on to their seats with one notable exception, and that’s in my home district, Metro 13. Residents, since the merger in 2002, have lacked district wide representation. We’ve seen the number of Section 8 housing increase along the number of rental housing as homeowners move due to the increase in crime (particularly meth labs). Our only police substation was closed several years ago. Businesses have closed, and drainage remains a problem.

The current Metro Councilwoman, Vicki Aubrey Welch is a very friendly person. Her intentions are good, but I think she’s overwhelmed by the problems facing this district. The residents of District 13 need someone who knows not just how the system works, but all the players too. They need someone with the moxie to face not just the challenges, but those standing in the way of change. I have, over the past four years, heard mounting complaints about the decline of this district. That’s why I expect Renay Davis will win in November. If she doesn’t and Welch doesn’t changes her ways, she’ll be a goner in next go around. 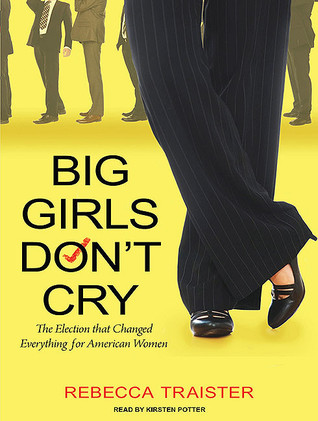 Big Girls Don’t Cry: The Election That Changes Everything for American Women by Rebecca Traister

Imagine being a liberal Democrat and an arch-feminist and having to face the choice of voting for Barak Obama and Hillary Clinton? Both candidates represent aspects dear to liberals and those who embrace the modern feminism. That was the uncomfortable choice the majority of Democrat Party---liberal women had to face in the 2008 Democratic Presidential Primary.

The author takes us on her personal soul searching journey with help from the current crop of media power players, Katie Couric, Tina Fey, Rachel Maddow, and Amy Poehler. There are constant jabs at “Mama Grizzly” and former Alaskan Governor, Sarah Palin (one almost gets the sense that a self assured and successful conservative professional woman was beyond their collective comprehension) along with some great history lessons about sexism and women’s rights, which makes the book itself worth the read.

I found the 299 page book interesting, and at times even humorous, however, the feminist theme seemed to wear a little thin for me. But, then again, perhaps that was simply the nature of not Ms. Traister’s quandary, but the quandary of the Democratic Party itself; supporting American’s first bi-racial presidential candidate and a political heroine that practically every woman in America could relate to. In the end, perhaps inevitably, Obama won first prize while Hillary was offered Secretary of State as part of a not to subtle settlement to end their inter-party feud. In some ways, there was something symbolic in the playing out on a national level what couples are forced to do daily, namely deciding who will sacrifice whose career for whom and ultimately, at what price. I have to wonder though, would Obama have so graciously accepted runner-up?
Posted by Paul Hosse at 10/11/2010 12:02:00 PM