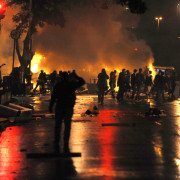 Much has been said about "Black Lives Matter", but from what I've seen, not much of it good. BLM first appeared a few years ago in Ferguson, Missouri. As I recall, they were "demanding" changes---police, local and state government---as well as demanding so-called "reparations" for something which never happened to them or anyone they knew (or, for that matter, anyone their great grandparents knew), and other "free stuff".

Somehow, society was responsible for their social problems as if free public education wasn't enough with free lunches and school books, or numerous social programs like rent assistance, LIHEAP to help pay for utility bills, welfare or unemployment should they become unemployed or the ample scholarships and grants to attend vocational schools or college. Somehow, that wasn't enough.

What I saw BLM deliver was attacks on police and fellow residents, especially those who happened to be white, Asian, or Hispanic. I saw them looting local businesses and burning them down along with the homes of people who had nothing to do with anything. In fact, many of them were far worse off financially. Most were recent immigrants from Communist countries like China or Vietnam.

A few had come from South Korea or the Philippines, not to mention Mexico or South America. They just wanted a chance at the "American Dream" like millions throughout the world. It was almost as if BLM resented these people for wanting to succeed due to their own hard work and education. BLM seemed angry that within a generation or two, they were fairly solid middle class, and had done so without demanding anyone give them anything other than an opportunity. Why is that you suppose?

Now, we see BLM again with the same old "demands" and the same old looting, arson, and violence. The biggest difference is that they've coordinated their efforts and gone nationwide. They've gained more airtime on TV, which has given them some sort of fake legitimacy, especially to the people not paying attention. They're openly demanding that statues representing our history be torn down simply because they don't like them, and not just former Confederate leaders or our Founding Fathers.

They've recently started in on statues of President Lincoln, U.S. Grant, Harriet Tubman, and Frederick Douglas. They've attacked statues of Gandhi. I expect they'll go after statues and pictures of Martin Luther King Junior next because he based his ministry of non-violence and judging people by the "content of their character and not by the color of their skin" on Gandhi's teachings. How "Uncle Tom" of him! They're even attacking statues and images of Jesus and Moses.

I've also seen some of their reputed "leaders" calling whites "sub-humans" and "genetic defects" that should be exterminated. Sounds pretty reminiscent of the Nazis doesn't it? I can't tell you the number of videos people have sent me showing gangs of black teenagers or young adults attacking lone white, Asian, or Hispanics kids (a few adults, mostly female, but mainly young kids). They literally get the crap beat out of them to the point where I imagine most need hospitalization.

I wonder if any Jews, gays, or even ethnic Slavs on the Left are feeling a little uneasy at the vague familiarity of the images? If not they should. It was exactly what the Nazi's did, first with the Brownshirts and then by the SS. Italy's Benito Mussolini and his Blackshirts did much the same thing as did the Imperial Japanese Army when it invaded Manchuria. Ole "Uncle Joe" Stalin wasn't any better and neither was China's Chairman Mao.

I've also seen spineless television and network presidents bow to demands to stop showing "offensive" movies like "Gone With the Wind". Newspapers have stopped publishing certain stories or descriptions because it might make some group "look bad"----but only that group! Book publishers are pulling books BLM might not like too. The same with schools. Various boards of education have yanked literary classics by Twain, Steinbeck, Orwell, Vonnegut, Laura Ingall Wilder, JD Salinger and Harper Lee (not to mention JK Rowling or CS Lewis).

Meanwhile, movies like "White Chicks" which portray two black males in "white face" or sitcoms showing a negative stereotype white, Asian, or Hispanic neighbor/friend are okay. "Gangsta" music videos and CDs which glorifies violence, rape, gang banging, and killing cops are completely acceptable. And watch what you say! Words are even being banned.

Apparently promoting stereotypes are acceptable provided the negativity goes in only one direction. Don't get me wrong. I laugh just as hard at white stereotype humor as anyone else's. I'm a huge fan of the comedy of Mel Brooks, Lenny Bruce, George Carlin, Robin Williams and others like them. In fact, I believe open humor like theirs is one of the best ways to dispel racism or hatred of any sort. We have to learn to laugh at ourselves; to see beyond the absurdities and barriers we've built up around ourselves.

I'm all for change. Heaven knows we need it. Our social, economic, and political structure is broken beyond repair. We've lost our republic. It was sacrificed on the altar of expediency. My condolences Ben Franklin. It wasn't perfect because Man isn't perfect, but it was the best damn government the world has yet seen. You and your ilk gave us a republic where the individual was the sovereign of their own life, but sadly we couldn't keep it Ben. We were distracted by video games, reality shows, sports, and being bribed with our own money by criminals we allowed to seize the levers of power.

Today we are an Oligarchy; a corrupt partnership between criminals holding office and corporate vultures who saw our republic as something to be plundered while we became their economic serfs; no longer citizens but indentured consumers whose worth is determined by our credit rating. I'm sorry Ben, not for myself but for our children and their children and the "what-might-have-been" moments.

Perhaps BLM and groups like Antifa are a symptom. They want change to be sure, but the change they want is for themselves. They want to be in charge not because they can make this a better country (I'd support them if I thought they could), but because they seek revenge for imagined injuries. I don't want to bring up the Nazis again, but they sought revenge too. They thought the Jews were responsible for all the ills of society. They identified Jews as "vermin"; a plague on civilization to be eradicated just like BLM is doing today. I hate to break it to them but the only "plague" on society I see is ignorance and intolerance, and it looks like they are infested with it.

Just a few days ago I saw a group of armed black...ahem..."militia" showed up at Stone Mountain Georgia demanding...again... that the huge craving of Confederate leader's Robert E. Lee, Stonewall Jackson, Jefferson Davis be removed. It seems they were "offended" as usual. The bas-relief carving, located in the Stone Mountain Park, is the largest Confederate memorial in the United States. At 3,200 acres, it is also the most visited destination in Georgia bar none.

This group of approximately 50 individuals were there not just to demand that the rock carving be destroyed but also to collect their "reparations". Yelp, they were there because they wanted somebody to give them something...again. One of the individuals in charge was accidently honest enough to admit that they expected to be given land too...like the state of Texas according to him...where they could create their own country. Guess he didn't know about Liberia, in Africa, which was created by former slaves in America for that very purpose. Of course, it's also one of those basket case countries dependant on US financial aid to stay afloat. 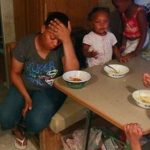 My humble suggestion for this "militia" as well as Black Lives Matter is to focus on real change and stop demanding that somebody keep giving them free stuff and they try earning it. Why don't they focus on improving the quality of black education in America, and by that I don't mean keep dumbing down the quality of education in this country. I mean focusing on actual learning. Instead of dumbing it down, start demanding that it be made tougher, especially in the areas of science, English, and mathematics. Let's see more black kids go to vocational schools and become successful business owners without needing any handouts from anyone, least of all the government.

Let's see black kids become the epitome of discipline in school. Where violence is not just frowned upon but actively discouraged by everyone, from the teachers to the school principal to the neighbors. Let's see black parents get active role in their child's education. It's not "somebody else's" job to raise their children. It's theirs. They brought them into this world. No one forced them. If they didn't want more children, they can actually do something about that. It's called contraceptives and it's called abstinence.

We also need to stop rewarding those who keep having children they have no intention of taking care of just for the extra government check. Let's also remove legal barriers which remove the father from the family. Sorry about your gender preference, but kids need a mother and father on a regular basis. They need stability in their lives. It builds self-confidence, trust, and the family unit which is basis of society. It helps them do better not just in school but in life. How about that BLM for a project?

Let's see BLM actively promote an end to a culture of school delinquency which discourages academic excellence as "acting white"; where academic success is the ticket out of poverty and dependence on handouts. They need to end drug and alcohol abuse which is running rampant in black neighborhoods. If they want to end police violence, which I agree is all to frequent, then end the culture which promotes ignoring authorities figures, from parents to ministers, to teachers and principals, to the police.

If you don't want to get shot, do what you're told. Put your hands where you are told to put them. Don't mouth off. Do as you're told. If you disagree or feel you're being picked on, fine. Get through the situation and hire a lawyer. Better yet, become a lawyer or cop and work to change the frinkin' system.

Instead of trying to promote separation, how about promoting full integration? You aren't the largest minority any more. You are the third, behind Hispanics, and on track to being surpassed by Asians. I think it would behoove you to learn to work together with everybody. By the way, stop hyphenating yourselves. You're Americans just like the rest of us. Your African ancestor, who was caught and sold by another African, left the Mother Country at least 213 years ago. Can you do that BLM?

Finally, simply dedicate yourselves to teaching personal responsibility. Nobody owes you anything. What happened to your distant ancestors is a shame; a travesty, but every people on this planet has been both slave and slave owner, so get over it. It's time to let the excuses go and grab the opportunities.